A small but satisfying part of the day was spent cleaning beer lines and trundling casks around. The snows are falling, and the ski resort up the hill will be opening on Friday. This means that the Winter lineup, as chaotic as it has been in the past given the size of our brewery and the amount of traffic that passes through here this time of year, is starting to take shape. First off, I tried again to make a Morland Old Speckled Hen Clone like I did last year. The results were better, what with actually using the specified ingredients instead of making a couple of substitutions. I'm having a pint right now.

Next up is our Winter Seasonal. The first cask of Tanninbomb is on Pump Number 5 (tm). This year's version of the Oak-Aged English Old Ale came out with a much fruitier nose and flavor that last year. Go figure. Same ingredients. It was probably the fact that I was on a fourth generation pitch of Nottingham from the half-gallon mason jar archive that did the deed. I have a suspicion that there are some insurgent bacteria strains that worked their way in, giving it a hint of sourness that I find quite nice, but I'll leave that up to all the bacterium experts clogging the airwaves (blogwaves) these days. This will be my next pint.

The third tipple on the pumps is a rare cask of the Cavatica Stout from Fort George Brewery in Astoria. The Grateful Deaf guy has been driving firkins around the state, and we traded with a cask of the Grateful Deaf American Pale Ale. I had a pint of this on gas when I was up there in September, and I have to say that the cask version really shines over the colder fizzy version.

All of this is not to suggest that the other three pumps are bored silly. Good stuff on those as well. Also, Winter Grub fills the plates, including our new and improved Proper English Hand-Cut Chips. Also also, on Friday and Saturday there will be live holiday music, with Americana with Craig and Tom (and maybe Steve) on Friday, and Celtic (drinking) songs on Saturday with the Lads of Leisure. See you at the pub.

Inspired by the discussions on "experimental beer" here and here, I'm going to use up extra and leftover ingredients tomorrow (Sunday) to make something reddish, hoppy and slightly roasty. The BJCP fans will have fun with this one. I've just trolled through the millhouse and hop storage and made a list of what's been sitting back there and needs to be used, now that it's November and we're losing money and need to use up what we have. I now have a list of 6 grainy bits and 5 pellety and aromatic things that are going into the Big Copper. The ratios are fun to work out, but I trust that whatever happens, my alternate aphorism of "what could go wrong?" will grind into gear and something flavorful and fermentable will employ its magic in FV1.

My principle aphorism, by the way, is "if it ain't broke, fix it until it is". I'll be muttering both of these sayings during the rigors of the brew day. Now, if I can just decide whether to use the Mason jar of harvested California Ale Yeast (which I don't like as it's top cropping and doesn't let me observe the ale during fermentation) or the plastic tub of North Yorkshire yeast from the Grateful Deaf brew. I'll let you know. See you at the pub in a couple of weeks when we get to drink it and marvel at the simplicity of professional brewing. I'll be the first guinea pig. 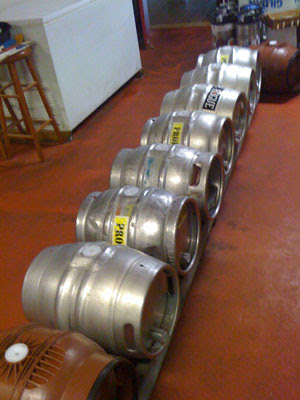 Yep. Another blog picture of casks lined up in the brewery. This time is special. Again. These casks, except for the brown plastic one on the end, are part of a Grateful Deaf brew project. A guest brewer by the name of Ken Fisher has been wanting to brew here for some time now, and that event is now a thing of the past. It was his recipe, and all the casks were provided so I didn't have to dip into my short supply for the regular batches. Some of them are stamped "Rogue", and there is an old Adnams and a Ringwood cask in there as well. I couldn't get the Adnams one clean, so substituted one of my own.

Ever since using the CypherCo plastic casks in England, I don't get that excited with the prospect of lugging around and cleaning stainless casks. They are too heavy for one thing. The older ones don't even have handles, so hauling them up to the second story on the stillage is a hernia waiting to happen. When I hoisted my last cask, the plastic cask, up to the cleaning sink after cleaning seven stainless ones, I had the experience akin to reaching into the fridge for the milk container thought to be full (and not) and crashing it into the shelf above. So light, friendly and stackable they are. And they roll well and have handles on both ends.

The formal unveiling of the Brewers Union Local 180 version of the Grateful Deaf American Pale Ale is to be tomorrow (Friday) at 4:00, but I have permission to put it on the board today. So I did. In fact, I'm sipping a half right now, and it's delicious. 5.2% ABV. The North Yorkshire yeast adds a nice subtle fruitiness. See you at the pub.