When the last batch of Union Dew, our Sorachi Ace hopped IPA, was casked up a couple of months ago, there was a wee bit left in the fermenter. It was decided that this might do (dew) just fine racked off into a corny keg and gassed up like a proper real kegged ale. It's now on the bar, pushed with a fine batch of West Coast extraneous CO2 and served cold.

It ain't the same, say the few locals who have been taking samples. I find that many of the interesting flavors have been subdued (subdewed) by the temperature and the busy bubbles. All-in-all, a valuable lesson in beer physics.

It's nice to hear the folks eager for the cask version, which should be back in the pumps in a week and a half.

Just back in time for the first pub superannuation after four days of just plain not being here. While not working the bar until this evening, I did personally perform the quality control job of sampling the cylinder of each of the pumps before opening to remind myself how nice it is to have a well-kept cask ale.

However, spankings are in order for the Fish Brewing Company in Olympia, which serves their single cask offering at room temperature. The poor waitress, when queried on the matter, said she was "told to serve it that way". Humph. Some ales can be just fine right up to ambient, but not their hoppy IPA. How could such a well-established and obviously cash-rich brewery give either the appearance of not knowing better, or simply not caring? It certainly would put many off real ale, and I suppose contributes to the notion that I often hear that real ale is warm and flat.

Pelican, another biggie in the industry, does the same. Their cask sits behind the bar and is gravity dispensed. At the end of the day, when I was there, the ale had sought out the ambient as well. If they were to take it seriously, and they certainly have the money to do so, then they could easily build a small cellar under or behind the bar. They get a Humph as well.

Pike in Seattle gets an A and will avoid a Humph for the time being.

In the Proper Real Keg department, the Lompoc Strong Draft on nitro at the Hedge House in Portland was superb. Perfect temperature, perfect mouthfeel, and a nice malty body with a hint of smoke. Recommended as the ideal pint to dry off soaked motorcycle gear by.

The 13th is the pub's first superannuation. Since I'm not much of a party planner, and the duties of just keeping this place afloat seem sufficiently adequate for the consumption of one's time and energies, I can boldly claim that there is not really going to be much going on. I do have it on good authority that the esteemed Porkesus shall be returning, our winged, prodigal, porcine pal, for a visit of cluck, swine and sauces from around the galaxy. Other than that, come down and have a pint. "Quid Hoc Sibi Vult" should be pouring, and possibly "Leftover Fuggles".

And for you doubters out there, PORKESUS IS REAL. REAL, I TELL YOU. JUST LIKE THE VELVETEEN RABBIT.

I think that if we've made it this far, through our first year, amidst poor financial and economic times, then we have a passable chance of a go at another. Or go silly crazy mad. And so, to stave that off, I'm strapping a tent and sleeping back atop Fair Chromio for a few days of just not being here. I hadn't been out for a good escape since the middle of May, so I'm due. See you on Thursday. 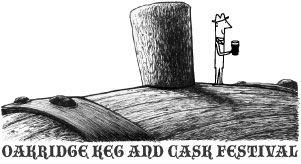 The first, hopefully annual, experimental Oakridge Keg & Cask Festival is coming up in a few weeks. Saturday, August 29th, to be exact. The last big meeting on this was today, an attempt to tighten up the loose ends. While I am not by any means the "Organizer", what with all the things going on here that make a pub and brewery function, I have tried to insert the sundry molecule of influence. One of the best festivals, if you want to call it that, that I've attended was a Brewers Weekend at the Prince of Wales pub in Foxfield, Cumbria in June of 2007. I was confronted with around 40 different cask ales, the actual presence of many of the brewers and owners, and a room to stay in above the pub when the lights were turned out. The experience of rubbing shoulders and buying rounds with real industry professionals, not indifferent volunteers, made all the difference. It is this simple idea that I've tried to inject into this small budding local festival.

For breweries, I had the idea of selecting around a dozen within a 100 mile radius of the pub. Not the big guys, but the smaller crafts willing to send a brewer and/or an owner around to serve and discuss their products. I was hoping for around eight breweries, but so far we've only ended up with four. A couple of wineries also. I was a little disappointed with some of the brewers/vintners that took either a wait-and-see attitude, or just gave the cold shoulder. Nevertheless, we shall have a good time all around, and there will be music and food vendors and, I think, games involving fruits and vegetables. 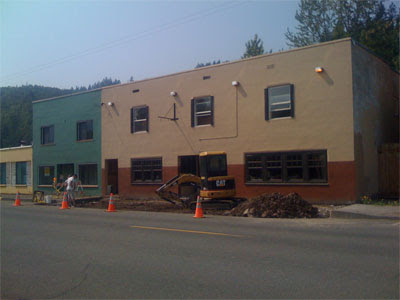 This pub is in a building constructed, along with the two to the West, around 1945. They are block buildings and they butt up against each other. It has interesting plumbing we discovered during the renovation. Common sense would've suggested that the collection of big black pipes would converge somewhere under the slab and run out to the street and into the main sewer. When constructing the front sidewalk patio we enthusiastically had the crew dig out the entire front of the building. Carefully, of course. Wouldn't want to crush the pipes.

There were no pipes. After scrambling around outside, we found a pipe coming from the back of the second story of the green building that had a clean-out near the ground, and after banging on it with a pipe wrench and listening to the clean-out in the ladies room we discovered that they shared a common destiny. That destiny is presumably the side street, the long way around, where I would image it works its way downhill to East First.

Something in those pipes got stuck today, because the water started pouring out of the floor sink in the kitchen, right while we were happily serving customers and I was awaiting the boil of my batch of hoppy ale. This is a Bad Thing (tm), because I dispense a great deal of water into that system on a brew day. If I didn't get it fixed, then a) I would have to toss out an entire batch, or b) I would forge ahead, allowing a couple hundred gallons of dihydrogen monoxide to flood the kitchen and bar. Fortunately one of the locals had a 20' snake, and I managed to root out some fascinating biological compounds and spent sanitary products, thereby freeing up, at least temporarily, the efflux of pub matter and mitigating my Level 2 Whinge.

The Good Thing (tm) that we've learned here is the demonstration of why the plumbing code insists on floor sinks in commercial kitchens. Also, I have a Sewer Expert coming tomorrow to do a thorough cleaning so this doesn't happen again for a month or two.

I hope this episode doesn't scare away all you promising young aspiring publicans. This state needs more pubs, so get out there and purchase or lease your space, get your Brewers Notice and Brewpub License, hire some staff, and get that career rolling. (And this means you, Jon the Lompoc brewer, as well).

Oh, and any happy trails and so forth to the 15 or so euro-bikers that showed up right when we opened, ate food and drank hardly and beer, and then left a whopping $5 tip. Woot!