That's what happens after four days of a busy Mountain Bike Oregon weekend, and that was after the last night. Granted, many of the firkins were already leaning by the time we opened the door for business. 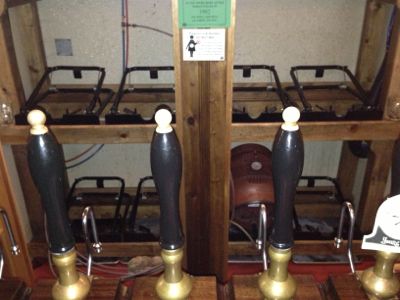 That was taken at 11:00 PM on a Sunday. One poor little firkin left over. Note to self, for the next pub make sure there are two slots on stillage per handpull.

And Then We Were Five

This was meant to be composed in a fit of brilliance yesterday, being that it was our fifth superannuation and we are still alive. With all the craziness going on this summer, I haven't really had time to reflect on what this means. That one-day-off-a-week project that I started this Spring didn't really materialize, except for last Friday when I took a half day. Perhaps this Friday I can attempt another half and just think about the pub.

Five. Yowzer! They say it takes three to five years in the BEST of times. It hasn't been so, something having to do with an economic downturn or some such thing. There were dark moments in the first three years when I just wanted to chuck it. Cash flow was poor in this diminutive and isolated mountain town. Then slowly in the fourth year we started to get caught up on the back bills and got the Oregon Department of Revenue and the IRS off our backs. In the fifth year we made some needed improvements and repairs to the kitchen, cellar and walk-in cooler and started staffing up a bit to cover the increased traffic. This is the first year that I've brought in brewery assistance and had double help in the front of the house during the peak hours on the weekends. While it cuts into the cash in a big way, it improves the customer experience and allows me a little time away. To plan. To scheme. To have a pint or two in someone else's pub.

Looking ahead, we are still thinking about growing this segment of small family-run pubs. I can't say too much at this point, but it's in the works. I don't suspect there is enough trade in the off-season to justify opening seven days a week, but that may come with a few more years. However, there are some other pub improvement projects we want to deal with during our closed days in the winter. And, I thought it might be time to start blogging again.

Anyway, HAPPY BIRTHDAY, PUB. I'm heading up front for one of those rare pints of our birthday beer, a cask of 7.1% Old Ale called "Oh(k), The Humanities!" aged for the last six months with oak chips soaked in Laphroaig. See you at the pub.