After being open more than 15 months, we get asked a lot of questions. As I work my own bar at least 20 hours a week, I have gathered my own collection of mental notes. I will likely be writing about some of the questions that get asked the most over the next couple of weeks.

A couple months ago the friendly guys from The Eastburn in Portland popped by on a quiet afternoon. Not more than a couple of words in, I was asked if they could buy a keg to take back up to Portland. I would wager that most breweries and brewpubs in Oregon are equipped to do this. Not so with us. First of all, with a few rare exceptions, we don't do any kegging. Our brew length is 8 firkins or 2 UK BBL. This translates into around 90 US gallons. There have been a couple of instances where there was enough ale left in the bottom of the fermenter to draw off into a corny keg, which holds five gallons, providing an interesting demonstration of the difference between a kegged and a casked version of the same ale. But, for the overwhelming amount of the volume produced, a pub interested in handling our ale would have to know how to handle a firkin.

Now, I know that there are a small number of establishments in Oregon that advertise cask conditioned beer. I also know that what they are in truth handling are kegs, likely Sankeys, to which they affix a beer engine. The contents of the kegs are dubiously named cask-conditioned beer, which in many cases simply contain ale destined for keg that has been drawn off from the fermenter and primed in the cask (keg). Handling a firkin is different. The requirements are: stillage, preferably with an auto-tilt; proper temperature control; sundries such as spiles and the right kind of taps for hammering into a keystone; and, very importantly, someone who knows how to handle all these things. So far, despite extensive research, I have only found a handful of places that can handle this. I have high hopes for Block 15, as they soon will be handling real ale in such a way that I would feel comfortable doing cask swaps.

Another important reason for not distributing is simple economics. Even if a pub were to be equipped with all the trappings and knowledge for handling real ale, there is still the problem of (as we are a business) making any money off of selling them a cask. A firkin nominally holds 72 20 oz. pints. In reality we might get 68 or so. Multiply this by the $4.50 to $5.50 we sell a pint for over the bar. For the sake of argument, let's just say that I can gross $350 for a cask. Not counting the brewer's labor, because we don't pay him, the cost of goods sold is around 10% to 20% of the gross. Now, if you, the pub or bar owner, wanted to purchase a cask, you would want to pay in the wholesale range. Kegs, 15.5 US gallons, go for $130 to $140, generally speaking. A firkin contains 10.8 US gallons, or around 2/3 the volume of a keg, so you would want to pay around $90. I could argue for the premium nature of our beer, given it's rarity and the fact that we brew small batches. I did manage to get $150 for the two casks I brought up to the Firkin Fest last year, but I guess that that would be an exception. So, it's easy to see that selling a pint over our own bar is the way to go. We can make sure that it is well kept while at the same time keeping the doors open and the lights on.

Another nice reason for not distributing is that we can stay in control of the delicate liquid. Yesterday I put on the first cask of Tanninbomb, my oak-aged old ale. I like having the confidence that the beer will be handled properly and described and discussed by our own staff. I suggest you pry yourself out of your house and come down for a pint. See you at the pub.

Frost on the Bumpkin

Yesterday I posted that a one-off winter stout is headed for the pumps. I couldn't resist trying it last night, and decided that it was ready to serve. It's deliciously malty and smooth, with a hint of rye. I believe at least a dozen pints have been liberated already.

The frost is now firmly affixed to the pumpkin, and so in the next few days I will be taking a crack at the first firkin of "Frost on the Bumpkin". As I sit here at the Trailhead Coffeehouse over a cup of rocket fuel, I'm succumbing to the temptation to at least vent the monster. After all, it's been on stillage for almost 24 hours now, having spent almost two weeks in the cask. A mallet and a spile stands between me and that nice little puff of trapped gas that portends a nicely conditioned ale. This is the first of my winter ales, unless you want to count "Schrodinger's Other Beer", and it is a seven-grain stout with a casked ABV of 6.6%. HUB had produced a seven-grain stout, and I found to my surprise that I had accidently done the same. What are the odds that we are using exactly the same seven grains in exactly the same proportions? (The exercise of calculating the aforementioned odds left to the reader).

The remnants of the fermenter, after casking Mr. Bumpkin, have already been used by Chef, who has been experimenting with our beers in both fresh and slop bucket form. Garlic and green stout makes a nice rub for steaks and roasts. I recently enjoyed a toasted, ale-caramelized garlic and cheddar sandwich, heavy on the garlic.

After Thanksgiving the first firkin of "Tanninbomb" will be on the pumps. I brewed this last year, and tweaked it again for this season. It will have gone almost three months in the cellar with a couple ounces of oak chips in each cask. I'm not much for fussing over beer styles, but I'm calling this an old ale. ABV is 6.8%.

To complete the upcoming lineup, I have the last cask of "Schrodinger's Beer" (not his Other beer) that I've been holding onto so that the fellow that helped me brew it can give it a go. Supposedly he will be up visiting Thanksgiving weekend.

It's rather unusual to have three IPA's, or so many ales over 5%, but stranger things have happened. I'm planning on brewing a malty sub-5% ale next time I can gather together eight empty firkins, which I'll be needing help with. So come on down, do some skiing, and have a pint or two. See you at the pub.

I've just started tinkering with the object in the following picture. It's a plate heat exchanger that was dropped off here on Friday from the friendly folks at Block 15 in Corvallis. They had come up for some solid and liquid provender, and to pick up their 2-cask auto-tilt rack that I ordered for them from England. As they weren't using this piece of equipment, I'm going to see if I can adapt it as a replacement for the quirky and inefficient, handmade counterflow unit that I had acquired with my brewing equipment. It's been having issues lately, and it has been difficult to get through a batch of beer without blowing a hose clamp. Age does that to things. And people. It has been a real trooper, though, despite it's homely demeanor, as 48 2 UK BBL batches have been pumped through it in the last 16 months. 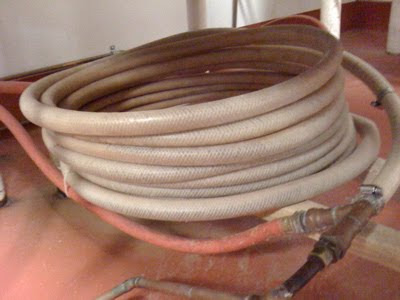 The puzzle that now faces me is to figure out just exactly what the fittings are on this thing. I certainly didn't recognize them, and neither did our resident knowledge-monger Ben. I was thinking a nice set of Tri Clovers would have been dandy, but alas, wishful thinking is just that. So, today, since I had to go to Eugene anyway (and it's been about three weeks since the last time - my, how times have changed), I thought I'd take it by a couple of plumbing and fitting shops. Same reaction - much scratching of heads and rummaging through catalogs. One shop took a picture and sent it off to some fitting manufacturer in Pennsylvania, so maybe I'll get a friendly and informative email in the next couple of days.

As an additional note, Block 15 will soon be serving genuine cask conditioned ale from an Angram mounted to the end of the bar. I eagerly look forward to cask swaps.

Scattered between the brewery, the cellar and the point of dispense (we'll call it "the bar") we have:

There is also a limited amount of resources available, especially this time of the year, for the purchase of grain, yeast and hops. The trick is to try to keep at least four cask ales on, with the requirements that there be at least one session beer, one dark (porter or stout) and one IPA. Casks need to rest at least a day for the finings to settle, and some of the stronger and/or dry-hopped ales require more time. A session beer can go to stillage in a week after casking, while some of the stronger and/or dry-hopped ales, again, require more time. Thanks to non-return valves and micro-filters on the shive I can get more than a week out of a slow cask. During the summer the problem becomes swapping them out fast enough.

One the other tricky bits is trying to be patient. Tanninbaum is still aging in the cellar until after Thanksgiving (maybe), and that first cask of Schrodinger's Other Beer is playing the siren every time I drift by. I'm determined to wait until Wednesday for that one.