It was a week ago when I took off to Portland for the Firkin Fest at the Green Dragon. The festival was Saturday, but I wanted to go up early, not only to get the stillage and casks set up the day before the festival, but also to have some time off. As is typical, when I return I find that all the work has piled up such that it takes several days before I can find a moment or two to write. The nice part is that a number of empty casks had piled up over the weekend, which means that I needed to brew more ale. The not so nice part is that there is mounting desk work, including taking a peek at the ol' bank account to see how it might stand up against the stack of bills. 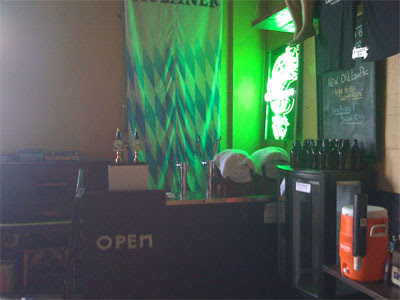 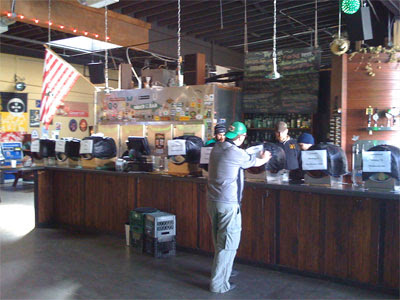 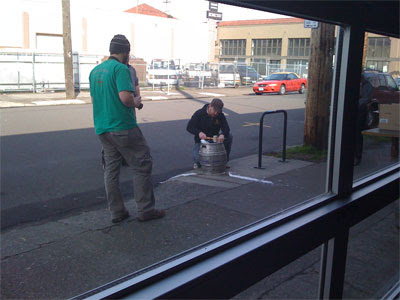 As the Local 180 was the only brewery dispensing out of handpulls, we were sent over to a corner like a naughty schoolboy. I was quite happy about this, as there was adequate space to rest two firkins and to set up the portable pub pulls, and to have elbow room for schmoozing during the festival. The other casks were all lined up on the bar and dispensed by gravity. I was in early Friday morning for the setup, as I needed to make sure the casks could settle before tapping. I returned Friday evening to vent, tap and taste. When I arrived Saturday morning for the final check I discovered, to the horror of anyone setting up a proper real ale festival (especially in the UK), that the firkins had been rolled on mere hours earlier. In fact, they were being tapped less than an hour before the festival opening. I suspect that none of the ales were true real ales, but were instead production brews destined for kegs which were simply drawn off into traditional firkins. Someone please correct me if I'm wrong. The keystone broke on one of the casks during tapping, and the offending vessel was hauled out into the street for keystone replacement. Another left it's mark on the ceiling when the spile was driven home. Fun.
There were two open sessions with space for 200 participants. The first session seemed about half full, so it proceeded at a nice pace, and I got to work the entire three hours pulling beers and flapping my gums. For the second, an enthusiastic volunteer took over for me for the last hour and a half so I could do some sampling. This is the part of the story where I must resist the temptation so say I liked so-and-so beer, or that Widget Brewing Company's Numpty Porter was rubbish (although Bridgeport's Raven Mad Imperial Porter was scrummy, and I don't even drink much porter). Instead, what captivated my little gray cells was how much better all the beers I got to sample were when liberated from the cask at a reasonable temperature and without all the gas. I have much praise for American brewers' understanding of the chemistry of brewing. The variety of styles and flavors is outstanding. The trouble I'm having, though, is with the physics of beer. For ales, there is much lost in insisting that they be served cold and full of giant, obnoxious bubbles. This simply numbs the palette and rules out any hope of appreciating the subtleties and mouthfeel. It is my continuing hope that an appreciation for real ale will increase, and I'm attempting to promote the style one proper pint at a  time.
While not dealing with the festival, I trolled around looking for real ale outlets in Portland. The offering from Tugboat was quite nice. The pint of Racer 5 I had at the Horse Brass, while a banner pint when I had it in December with Dave Bailey of the Woolpack Inn, had lost most of its conditioning - still nice to have though. I finished at the Rock Bottom, where there were two offerings on cask. I noticed that both casks were equipped with breathers. I can't remember the style of the first pint I had (no jokes please), which was delightful to come across in keg country, but I recall that the stout I had second was starting to turn just a little. The barkeep merely nodded at me when I mentioned this, and I imagined him ticking the snob checkbox on my entry in his POS.
Before and after the main Portland segment of my trip, I stopped at the Highland Stillhouse in Oregon City. I love this place. In my book it rivals the aforementioned Horse Brass pub in its likeness and atmosphere to a British pub. I have hopes to someday drive up a firkin or two for a mini-festival.
Some other nice commentary of the Firkin Fest can be found here and here.
Posted by Brewers Union Local 180 at 10:02 AM

I like the name Numpty Porter. Has anyone done a beer called the Harry Porter yet?

Hey Ted: It was nice to meet you in person at the Fest. Keep up the good work, and bring us your beers when conditions allow.

You wrote "I suspect that none of the ales were true real ales, but were instead production brews destined for kegs which were simply drawn off into traditional firkins". I can't speak authoritatively on this, but I think the answer is "yes and no". At least some of the firkin-fest beers were re-conditioned in the cask. Is that enough to make them true real ales?

Either way, you raise a valid point. I think that most of the "cask" beers served around Portland are indeed just regular kegs served slightly warmer (though occasionally ice cold -- dammit!) through a beer engine. I wish I knew more about it.

Got a couple shots of you pulling beer from the FF 2009. Great beer! Thanks for making it out and giving us a taste of your sweet nectar!

Some nice shots of cheese as well.