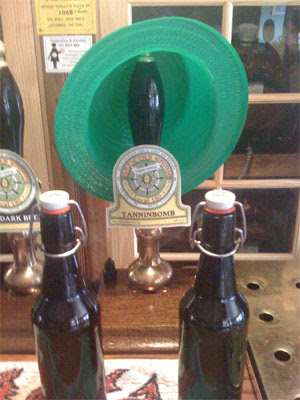 NO! Not the pub - the pub has been open more than seven months. This is about an old friend of mine who recently has made her appearance. (HIS appearance? What gender is beer?)
I had promised to roll out the last cask of Tanninbomb, my oak-aged old ale, on St. Patrick's Day. This is cask number eight out of eight, and has survived over six months with 2 oz. of oak chips drifting about aimlessly in the firkin. ABV is 6.2%, prior to casking. I wonder what it is now.
Anyway, I tapped it a bit before the appointed date so my sister could taste it on her visit before she left to go back to NY. Yep. That's the reason; so my sister could taste it. I might've had a wee dram myself just for history's sake.
It is delicious. Another nameless individual, being a pub member, had a sample last night during Scrabble madness from the unmarked pump handle and made the comment that the flavor was flirting with the qualities of a liquor. This has caused me, nay, even forced me, to have another sample while I write this blog entry.
I wonder how long it will last. I estimate that there are about 60 to 65 imperial pints left in the firkin. While it is a Tuesday night, which are generally slow, I will be curious to see if there will be a statistically significant draw.
So why the two bottles in the picture? It is because I was shamed into bottling some for posterity, and also for additional incentive to someday return to Cumbria when I am, for the first time in my life, flush with cash.
Posted by Brewers Union Local 180 at 2:56 PM

Wonderful, I do hope it keeps. Did you prime them at all?

I stopped by last night for a couple pints of that lone cask. Very tasty. I enjoyed them greatly as well as a nice dinner prepared by SWMBO!

Hopefully you found the little present I left for you!

Dave: Not primed. I didn't want to change the characteristics. I left very little headroom in the bottles, so there should still be a little conditioning left.

Dave: I heard, and bagged the evidence, that you popped in. The rye went off after you left and I put on the new bitter, which I'll also be taking to Portland this weekend for the firkin fest.

And your sister appreciated it! Yum. Complex. Effortless and delicious.