Huh? We need to have a talk.

I'm not really sure how to write this. Not having much truck with incendiary or controversial threads, I tend towards keeping the flow middle of the road. If I were to argue, lets do it friendly-like. Over a pint or two. A lovely game of croquet comes also highly rated. This is just part and parcel of being a publican - smoothing things out, treating everyone as equals, keeping the smiles and the laughter above average and so forth.

However, I just sat down at my computer to write one of the many posts I've been muddling around in my head about my trip to England last month, and on my way to my grotty lackluster pub "office" I picked up the new copy of the Northwest Brewing News that gets shipped to us every two months. This copy was dated "December/Januaruy 2011/2012". Spell check.

I like this rag. I know some of the pens that regularly write for it. We've been mentioned in it, which is unusual given our size. It usually is a useful and informative read, and it has the best beer and pub listings and maps, with our own little numbered black dot on it. But. BUT. An article leapt out at me: The "Behind the Bar" column by Bob Brenlin entitled "The British are Coming, but we are Not CAMRA Ready." This got me a little bit miffed. I'll explain. Starting with the second paragraph:

… our cask tradition is not CAMRA (Campaign for Real Ale) approved, nor will it ever be.

True, generally speaking, up to the "ever be" part. That sentence needs some work, starting with the irony. The article goes on to talk about the MBAA meeting I went to in Seattle at the beginning of November, and how we (Americans) would have our lame attempts at cask ale chucked down the drain in England. Funny thing — I was invited to give a talk at the meeting to talk about how we, as a small cask brewery and public house, were following the tradition. The why's, the how's, the small bits of effort and infrastructure involved in making and serving a proper pint. The education of the staff. The training on British soil. Not mentioned in the article. At all.

I could go on and on with the article, pointing out my grievances (e.g. "casks must undergo secondary fermentation at room temperature"). I won't. Just read it for yourselves, if you can locate a copy; I don't believe they publish it online until archive time. Perhaps I should go back to the mundane principles of my original paragraph and just write about how lovely it was to once again sit in the Bear Inn in Oxford and relax over a pint of Ordinary. I can't, though, because I remember having a couple conversations with one of the two English brewers (mentioned in the article) at the Friday cask feast at the MBAA meeting. He was drinking from the firkin of our 3.7% Dark Mild that we donated to the cause, served through the Brewers Union portable beer engine kit. It was bright, flavorful, drinkable, traditional, and, at the end of the night, completely drained. 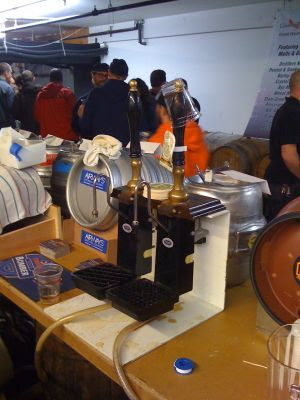 I DO want to argue now. Bring it on. I'll buy the introductory pint. The first of our properly brewed, cellared, and dispensed firkins of Tanninbomb (oaky old ale) goes on this coming weekend. It will be bright, traditional, and delicious. I'm just about to roll it onto the stillage. See you at the pub. 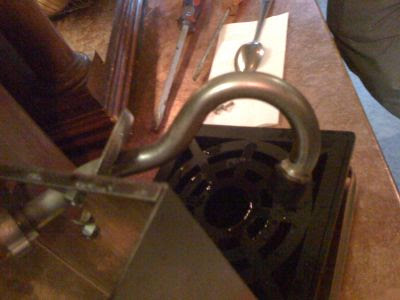