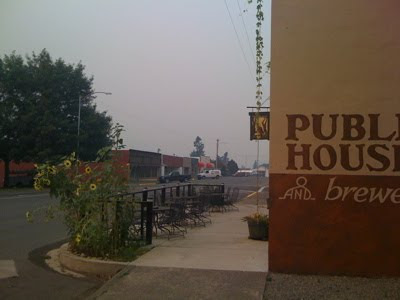 The fire is much worse today. The mountains are obscured and the sun is barely noticeable through the smoke. A gentle ash is falling.

Looking at the bright side, the helicopter crews have discovered us. And they've discovered real ale, much to their delight. We sold 40 servings (pints and halfs) of our own ale, and only 3 of the guest gas taps, last night. 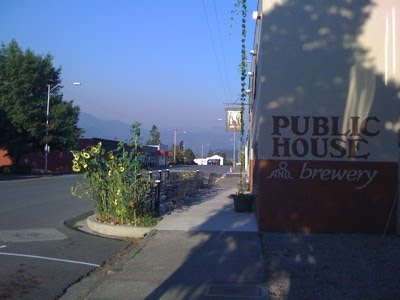 I've got it figured out. Just get up early and all will be well. I also needed to call England to check on my order from acask.com, which so far has taken them two weeks to figure out the shipping. The smoke from the fires south of here had all drifted west and was covering the mountains. The sunset should be interesting again tonight.

I had thought, given the four hours between 8:00 and 12:00, that I could get the beer racked. Also, while waiting for each cask to get washed, I could clean the beer lines. By 11:45 I managed to do same, but only got the wash and rinse on the casks. The pub opened at noon, so I have to wait until 5:00 for my temporary barkeep Jill to take over. I figure between 5:00 and 6:00 I can get the bitter into the casks and not have to be up until the wee hours hammering in those shives. 8:00 to 6:00 then, with coming back after play practice to do the closing at 10:00 PM - a not so unreasonably long day.

For you DIY homebrewers and aspiring small brewpub owners, you can make a smashing good cask wash system out of a sink, a cheepo sump pump, some copper fittings, and a spinning wash head from The Compleat Winemaker 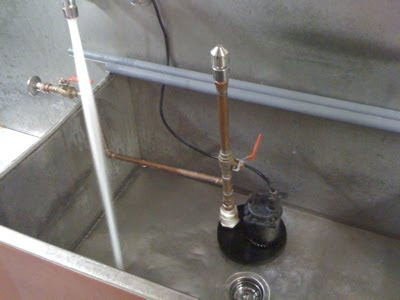 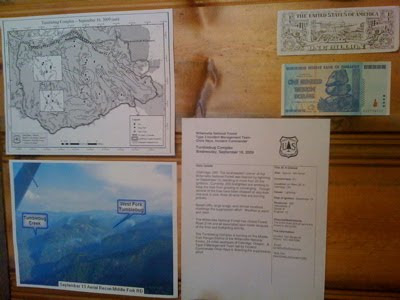 Seems we've moved from Summer directly to Fire Season. A series of storms that blew through last week set some fires south of Oakridge, in steep and wooded terrain. The fire info guy drops by the maps and the update every day, and we keep it posted at the pub. Last year it was the fire crews that helped us through a slow first-year October, when the crews of 25 or 30 would drop by on a quiet Tuesday night and stress the kitchen. We've only seen sporadic groups so far - nothing to overwhelm. From what I have been told today, from one of the upper layer people in the Interagency Fire Team, the crews are required to be "well-behaved". Unless they are off duty. It's really hard to be ready for this.

With my main bar staff gone for eight days to Interbike in Las Vegas, I'm on the bar straight through from Sunday to Sunday. I have some sporadic part-time help in the middle of the week, but otherwise the thirsty punters will have to enjoy my good looks and witty banter on a regular basis for the time being. This does cause the problem, though, of getting to the brewery to prepare for when the fire crews DO get their break. I have safely tucked away Tanninbomb in the cellar, to be tapped the first week of December, but I have a bitter in the fermenter that needs to be casked up in a day or two. The tenants upstairs may have to suffer through the sound of a mallet knocking in shives at 1:00 AM. We're also just about out of Union Dew, AGAIN, and I won't be able to tackle the problem until next week.

I don't get out much these days, as has been readily observed by my nervous tick and slumped shoulders, but am down in Eugene to run errands. Most importantly, one of the antique steamer windows that serves as doors to the keg beer coolor broke the other day is getting replaced with lexan. Also, food and bar stock is being acquired, including another box of pens for the bar that seem to disappear at the rate of one a day. As a reward for driving the around the Big City, I get to sit at the High Street Cafe and have a pint or two while handling all the computer-related work that comes with the job. I am pleased that the new brewer here, Chris, is turning out some refreshing quality and variety. Other than my place, this is the first time in a coon's age that I've been able to enjoy a mild. It is billed as an American Mild, which maybe means that it is brewed with domestic pale malts and served at 35˚ an a 16 oz. shaker glass. Nice on the palette. I wish it could've been on the one beer engine instead of the Wheat. 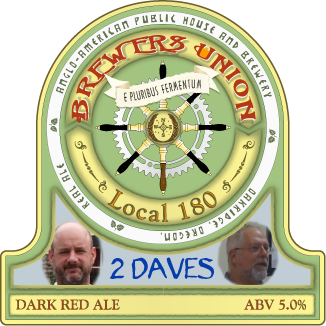 I've had this batch on the pumps for several weeks now, and there are only two casks left in the cellar, so come and get your pint before the next guy does. It is based off a recipe that is based off a recipe. In the classic nature of handed-down news, I suspect what I have going on here is much different than from the originator of the homebrew recipe, Dave A (on the right). In fact, I know that it is different because I have had the original dispensed from the kegerator in his garage. It was called Zippy IPA at the time.

A bottle of original made its way to our sister pub the Woolpack Inn a couple of years ago, nestled in a sock inside a backpack inside the belly of a United Airlines jet. It took a year, but the bottle was discovered lurking in the cellar and summarily consumed, causing Dave B (on the left) to inquire about the origin of the bottle. This led to the acquisition of the recipe, and its subsequent modification into a number called Zippy Red IPA.

I decided to have a go at it one day, and called Dave B for the recipe. There was some confusion as to crystal malt color designations, as the British like using arcane units of measure, but I just used 120L crystal for whatever was specified as crystal. Upon tapping, we discovered this lovely dark red stuff that had nice balance and a subtle hop aroma. Would I call it an IPA, like Dave A and Dave B did? Nope. It wasn't pale, for one thing, and it wasn't destined for India. It was just a dark red hoppy ale, albeit yummy, so I've been using the official style designation "Dark Red Ale". I think the official style designations have gotten a bit silly and out of hand, so I can make up my own; it's my pub.

This whole IPA thing has gotten out of hand. I like the occasional hop bomb, but for a nice night out at the pub I, generally speaking, don't require a hammer that large. I'm even getting more touchy about people stomping up to the bar and demanding (not "please" or "may I have") an IPA, without even looking at the beer list. Of course I can't appear touchy, what with the diminishing quality of customer service that this entails, but I'll talk about you when you leave, and you know who you are. The other one I often get is "What's your hoppiest?". This could mean several things. Are you talking about the finish; or about the number of IBU's; or what about that massive amount of bittering that doesn't translate into aroma. I have a nice bitter on right now that's nice and hoppy, what with the 0.3 Kg of Fuggles dumped in at flameout. It's sure hoppy by many standards, but its 3.5% ABV and lack of citrus confuses the unwashed masses.

2 Daves certainly is "hoppy", double quotes intended, but three of the handy imperial nonics will serve you nicely for an evening session at the Local 180. See you there.

It's Too Early for the Slow Season

School has started already. The idea of them going to school before the Labor Day weekend has been a hard adjustment, as this weekend is a holiday weekend and already the trade has slacked off dramatically. This last week at the pub was heralded by the plaintive sound of crickets.

August was very good to us. Last weekend was the first Oakridge Keg & Cask Festival, which, for an inaugural event, was a great success. Thanks to Angelo for a nice write-up on Brewpublic, but for the record the credit for this event really goes to our local Danielle Bowerman who organized it, and all the volunteers that made it all happen. All I did was throw out some opinions, help with the logo design, and try to keep a pub up and running. Everybody seemed to be happy, the music was great, and the Oakridge Food Bank and the Oakridge/Westfir Chamber of Commerce made off with some cash. Some pictures are here.

The week before that was another Mountain Bike Oregon event. The August event was bigger and better than the July event, and the pub and the other beer sponsors gave away copious amounts of refreshment. The pub had its busiest day ever on the Thursday when all 500 or so participants arrived into town.

But it's now September. Trade is slacking off. Vacations are over. School has started. I had hoped to stash more cash away during the busy Summer, but any extra money was earmarked for covering back bills from the slow Spring. I do so look forward to pulling in some income someday and achieving positive cash flow, but for the time being we'll just have to tighten our belts and look forward to ski season. Perhaps we'll be pleasantly surprised, though, as we do have a year behind us and the fan base is growing. Come October we will be shortening our hours, which will include closing on Tuesdays this Winter.

Expect some new ales soon. I just brewed yesterday, with the assistance of a visiting professional brewer, a hoppy West Coast style IPA, balanced for cask rather than the extremes that are appearing on keg all over the place. The first cask of batch 10 of Union Dew is in the pumps right now, and it's chock full o' yum. Next weekend a firkin of Cumbrian Moor, a porter, will be appearing. This is based off last year's recipe, but hopefully with more body. Sometime next week I will be working on mashing 295 lbs. of grain for our winter Tanninbomb, which will be appearing after Thanksgiving with all it's oak chip goodness.

See you at the pub.