Wednesday morning at the Trailhead - the weekly hide-in-a-corner and think moment. I've just read, as is my wont, a number of British pub and beer blogs, many of which were heading down the slippery slope of increasing antagonism. So, I thought I'd write about something positive.

Yep. Legend and lore has it that "there's no such thing", but this past weekend was the first-of-the-season Mountain Bike Oregon event in our little ex-logging, ex-mining, ex-railroad, ex-tourism town up in the sunny Oregon Cascades, and such a thing there was. As sponsors, the Brewers Union and three other local breweries, Oakshire, Ninkasi and Block15, gave away copious amounts of liquid bounty. The cyclists, around 300 of them, were mostly encamped out at the Greenwaters Park, where a beer garden was set up in front of the amphitheater. I chose not to provide my wares at the park, as all my regular bar staff was involved with the event and, as such, I couldn't get away to set up and operate portable stillage. My solution was to give away pints of whatever was on the handpulls concurrent with the opening hours of the beer garden at the park. My solution to the lack of staffing was to work the bar from Thursday night at 6 PM to Saturday night at 11:30 PM, with the periodic, helpful assistance of my friend Dave . This is not a recommended method of recovery for plantar fasciitis. 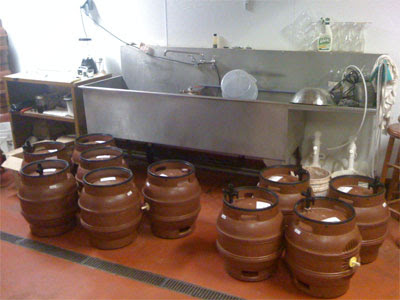 Free beer: Friday and Saturday, 4 to 10. Most of us have recovered by now. The corpses in the picture were not all given away; I'm guessing we sold around half of them, especially on Thursday when we had our highest grossing night since we opened around 11 months ago.

The saddest part of Saturday night was cleaning up all the partially consumed pint glasses after the doors were heaved shut at 11:30. For the second MBO event in August I'm considering bringing out several cases of half pint glassware, instead of drawing full pints. I also have a lot of brewing to do in the next month. I tucked away a special bitter into FV1 yesterday, and will be cleaning the copper out and brewing again tomorrow. Maybe. Alternatively I could rest my sore feet and tuck into a good book.

Yes, I had the same sinking feeling when I saw all the waste vegetables going back to the kitchen after the beer festival, because we decided to have a help yourself system.

How do you decide who gets free beer and who pays?

It was fun to work for a living. Look forward to the next one! You might have a good idea with the 1/2 pint thought.