In May of 2006, on the West Cumbrian Line from Ravenglass to Carlisle, a silly germ of an idea of opening an English Real Ale Pub and Brewery in a depressed logging town in the Oregon Cascades was born. On August 13, 2008, the Brewers Union Local 180 opened its door. It's now four years later and we're still here. Amazing.

I'm sitting here in the brewery knocking out a batch of stout and trying to let that fact sink in. Who woulda thunk that the worst economic downturn since the Great Depression of 1929 would strike a few months after opening. There were many plot points in the last four years where I considered closing or moving. It was bleak. There was scarce trade at first. There was that late and lame winter and that wet spring that kept the mountain bikes off the trails until June. There's still that IRS lien that I've almost worked off. Long hours. No pay. The occasional negative review.

A line from an old Bruce Cockburn song just popped into my head, from "Fascist Architecture":

Bloody nose and burning eyesRaised in laughter to the skies

Hah! They say it takes three to five years for a new business to become successful. I don't know what measure of success is referred to there, but in the worst of times and a tough town with an unknown product all I can say is we're still kicking. Even better, it looks like we're finally crossing a threshold. Production and consumption is up enough that we had, and were able to, buy more casks and complete a new cask cellar. New problems are arising, such as how to find time to brew and where to find staff as traffic increases in the pub. I've been thinking it might be time to hire a part time house manager. That sort of thing. And better yet, there are rumblings and murmurs along the lines of building another pub or two, maybe even in your small town. I think we are about 40,000 short in this state alone. 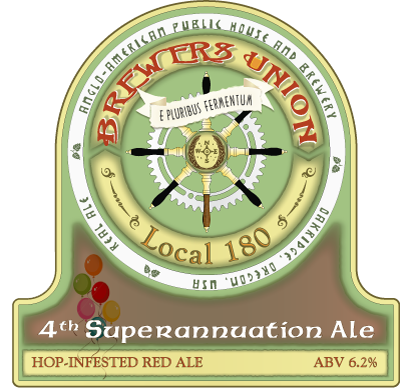 So, for today we are offering a special ale called "4th Superannuation Ale", and it will be a $3 Imperial Pint all day long. It's called an Oakridge Red Ale, since we invented the concept of adding a lot of hops to a strong red ale (Millennium, Chinook, Glacier and Armadillo). I think it might even be called a Red IPA or a Cascadian Red Ale now in the BJCP guidelines. Go figure. 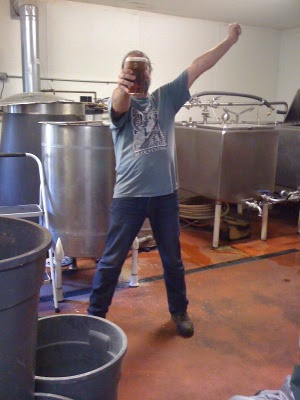 Catchy, isn't it? Mayhap you were thinking big chunks of stainless or a new automated casking system or something. Nope - we're talking here about new casks and a new proper cellar. 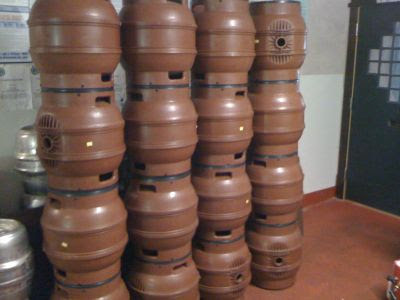 Truth is, for me it's massive because I've been trying for three years to purchase more casks and have a better place to store them. Yes, that's all I'm talking about: more casks and a better place to store them. So, a shipment of shiny plastic firkins arrived last week, 16 in all, which is enough for two batches. My current inventory of 46 wasn't enough, as it created a limitation for when I could brew. There's no point in brewing a batch of beer and then finding nothing to put it in. I can also now have a larger inventory of ale in the cellar, allow them to mature longer, and do a bit more oak aging. It's also an indicator that trade is up this summer and all you lovely punters are latching on to real ale. 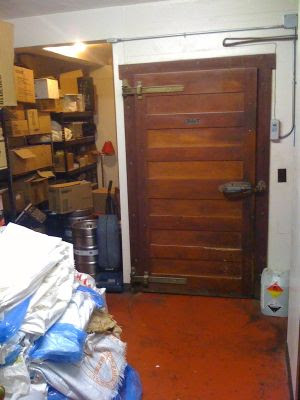 The other problem of storage space is being addressed at the moment as well. Currently our casks share the walk-in cooler (behind the giant wooden door) with the kitchen supplies, kegged beer, soft drinks, wine and my hop shelf. It's been cramped in there. The space next to it if full of junk interspersed with useful things that could likely find a new home in some other part of the building. That space is now being converted into a room tied to the walk-in via a temperature controlled fan system to keep the temperature at a cool 50° instead of the 40° required for the food storage. 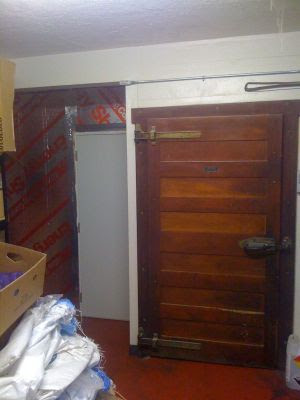 The whole deal should be finished in a few days and ready for receiving it's cargo. Meanwhile I've got some brewing to do.