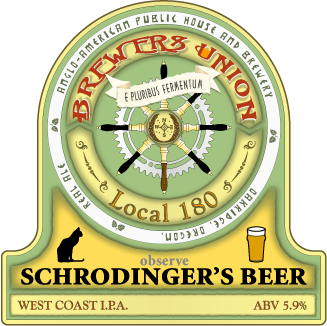 Cask number 4 is being served. Cask number 5 is settling out on the stillage. Numbers 6, 7 and 8 are in the back cellar. And I still haven't written about Schrodinger's Beer. Many of you may be familiar with the famous thought experiment by physicist Erwin Schrodinger involving the unknown state of a cat in a box subjected to the uncertainty of quantum events. Is the cat dead, alive, or in a putative third state until observed? Same with this beer. It was an experiment. Many of the concoctions coming out of the brewery are.

I've written before about hoppy, high gravity West Coast style IPA's on cask, also referenced from "It's Pub Night", although slightly inaccurately, as I don't question the sanity, per se. I am tempted to use the verb "designed" when talking about how the recipe came about, but that always sounds so much like what the Big Boys do, instead of someone who has never had any formal training in the arts. So, I'll say that I hacked together the recipe, based on my first attempt at a biggie cask IPA over the summer called "Whatever". This batch was deemed too light on the bittering, as if there was a hole in the flavor profile, so I cleverly decided to double the bittering hops. Otherwise, same grain bill and finishing.

A further word about experimentation: Before the pub opened, during the hop crisis, I had very little choice as to what to purchase in the way of hops. As a very small brewery, the cash flow and uncertainty of a new business, especially in a small town in the woods, makes it unfeasible to contract with hop growers and suppliers. As a result, I ended up with spending $6000 on a few boxes of three strains: E. Kent Goldings, Glacier and Sorachi Ace. Never heard of the last one? I've found few brewers using it - that I know of, that is. It's a strange one, with a unique lemony (for lack of a better word) flavor and aroma. It's also 14% alpha. This hop is the driving force behind Union Dew, an unusual, unique and popular IPA, and which is the one beer that I continue to have to brew on a regular basis. Batch 11 was just casked up two days ago.

How does this relate to Schrodinger's Beer? Well, I wanted to see how it acts as just a bittering hop. 1 Kilo of this up front, along with 2 Kilos of Glacier, makes up the bittering. The finish is 3 Kilos of Cascade spread out over 15 minutes. Dry hop was 40 grams Cascade per firkin. I suffered through two weeks of nervous impatience before tapping the first cask. It has subsequently been pronounced delicious - the first firkin only lasting a day and a half. It's not over the top in any way, coming out at 5.9%.

Many of you American readers might not know what a sparkler is. It is a plastic device with small holes in it that is screwed onto the end of the swans neck of a beer engine. The effect of an ale dispensed in this manner is a creamer, smoother mouthfeel. In the UK it is a subject of much controversy, ofttimes caustic, with those of a generally Southern persuasion describing it as a "nefarious device" or the "work of the devil". I can handle cask ale both ways, but tend to prefer the common Northern inclination for drinking a sparkled ale. I have discovered, however, that this particular ale, and likely the bigger West Coast styles in general, is definitely better sans sparkler. So be it - that is the way it is being served. Come down and try a pint. See you at the pub.

Maybe so. Maybe so. As the gravity is measured with a primitive hydrometer before the fermentation has come to completion, often without temperature correction, the ABV is likely higher in the cask after conditioning. It feels like 6.23% to my sensitive palette.

But that was a week ago. It has at least gained a few hundredths of a percent since then.

Very true, I suppose another test is in order!

Clearly the actual ABV is in an undefined state until the beer is actually drunk. Any sample of beer taken for analysis would not be beer for consumption and therefore it's ABV is irrelevant.

In conclusion, the only real way to test it's true ABV, at the time of consumption, would be to take an experienced drinker who has a calibrated drinking induced unconsciousness threshold and for him/her to consume said beverage until that state is observed.

I'm available for said experiment in exchange for the price of a flight to Oregon......I've been carefully calibrating my threshold for years and certification can be provided.

To provide a cost effective solution, several beers could be analysed over a period of several days....

You have your airfare money to Brewdog.