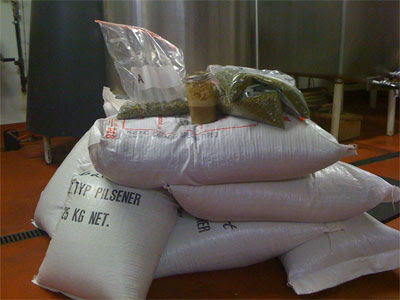 Oh boy, I can't wait. Thanks so much for sharing the geeky stuff!

Good luck--that Ardennes yeast is a bear. They used it a couple years ago at Cheers to Belgian Beers in Portland, and many of the beers turned out underfermented, heavy, and sweet.

It's probably good that you've got rye in there. What did you hop it with? At what level?

Some of the other brewers down here said that they had a slow ferment, but that it completed.

The hops that were chosen are Ahtanum, Sterling and Millenium. Each brewery gets to choose the which, when and how much. All three are also to be used in some combination for dry hopping. I'm using Millenium for bittering, and then three separate drops of a mix of the other two for aroma and flavor.

I've put together a starter of my house yeast this morning to give the batch a kick start. This will dry the beer somewhat, and hopefully raise the temperature towards the end. Also, hopefully, it will save the beer!

This is a very tasty beer Ted. I was impressed and I think everyone will love it!!