Or is that "A" Historical Moment? There appears to be a hole in my grammar knowledge.

I had reported earlier that Block 15 in Corvallis has installed a beer engine and the related bits and pieces down in the cellar and has started producing real cask ale. I had delivered four of our casks up there a few weeks ago, and yesterday was my chance to retrieve some of those casks filled with Block 15 ale. Three of the four came back with me, one of which was ready for stillage.

The cask of Reporter went on stillage in the afternoon. And in the evening my frontside was bathed in the eruption produced by the introduction of the spile into the shive. This little problem was mitigated by an overnight venting, and all was well by noon today. 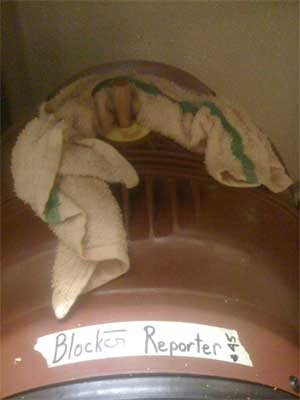 I'm excited, for the first time that I know of in the history of modern brewing in Oregon, that a successful cask swap has been completed, and the Brewers Union beer engine array now has a guest cask, drawn as shown by the capable hands of Ben the Extraordinary Barkeep. I'm not much of a brown ale fan, but this batch is tasty, with suggestions that someone has thrown some smoked malt into the bargain. I hope Block 15 doesn't mind me designing a pump clip for their beer. See you at the pub. A stupid question perhaps, do you use a sparkler?

Yes. Mostly. I've been experimenting with producing West Coast IPA's on cask, not always successfully, and have found that the sparkler knocks out hop flavors and aromas. I've been serving those without sparklers.

There is an interesting recent post on The Beer Nut about hoppier beers on cask. I'm brewing another batch today that is less heavy on the hops and with a higher mash temperature for the sake of the arts.

I'm really glad to see your beer migrating. Any chance of an arrangement with a pub in Portland?

I have checked around Portland on numerous occasions, and there are a few blog entries on the subject. My conclusion, unless things change up there, is that it is just not feasible at the moment. It's a question of the financial and technical aspects of doing cask beer in Oregon. See http://brewersunion.blogspot.com/2009/11/faq-1-distribution.html.

Good to see our beer pulling at your pub! I haven't had a porter shower yet, though Aboriginale isnt bad to bathe in!

It's been well received, although we don't have the people turnover that you do, and as such it is still on the pumps. However, the cask is seriously leaning and should go off soon. What smoked malt are you using in there?

I think the venting issue might be due to my haste in putting it on. I did vent it six hours after putting it on stillage, which was the same day I drove it an hour and 45 minutes in the back of the car.

The two casks of Red are in the cellar and will go on soon.