A week has gone by. Turns out I didn't abscond with the beer as fantasized about in previous post, foregoing the inherent entertainment value therein, and went on my appointed rounds as, well, appointed. After spending four days in Portland, thoughts worthy of blog potential were rattling around the slowly decaying cortex. Now all the edges have worn off and I'm trying to at least put something together worthy of the kind of mediocrity that comes about at the end of a long day. 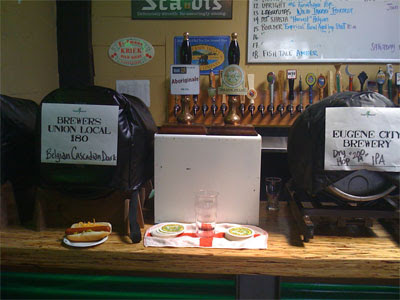 I have some observations. Yes, I do. And so had a number of other bloggers. I read you all. Now it's my turn. Observation Number One is, how have we become so fussy? Are we all that spoiled? I mean, it's one thing to point out the fly in the soup, or the pint of vinegar, but there were some really nice tipples at the Firkin Fest. Twenty years ago, were we to run across such a lineup, we'd be swooning and mooning and crooning the delights. Granted, for a festival devoted to cask ales, it is odd to have half of them be IPA's, but, ladies and gentlemen, wasn't the experience worth the cash and the time. One cask was cloudy with yeast, and another had a hint of sulphur in the nose, but all were drinkable and pleasant. Regarding the sulphur aroma, from an organic mild (YES!) from HUB, I had no problem with this, but I'm probably one of the few in the vicinity that has enjoyed some nice Burton-oriented ales in the UK. And I got dinged for not bringing up a session beer, unlike last year where I got dinged for bringing up a session beer. I'm still trying to figure that one out.

Observation Number Two: I like the East side of the river over the West side. I thought it would be fun to just spend my last evening in town walking around the city from my motel near PSU. A bit too noisy and poncy for me. A better plan would've been to park on the small numbers of Belmont, or Fremont, and just walk through the little neighborhoods all night.

Observation Number Three: I managed to survive a Meet-The-Brewer event at Belmont Station. This is perhaps due to being able to lurk unobtrusively in a corner. I was satisfied to see the cask of This Time For Sure drain in a couple of hours. The Green Dragon has also talked me into a similar event at the end of May, mainly by plying me with ale and assuring me that I wouldn't have to give a speech.

Observation Number Five: Knowledge or real ale is dismal in this state. Don't ask me again if I'm using a nitro tap.

That's all. Just finishing a heat transfer of a Welsh Mild and enjoying a pint. See you at the pub.

"Knowledge of real ale is dismal in this state."

I guess that is the case in the vast majority of the States, though we have a few beer engines in Charlottesville. I am tempted at times to ask how long they keep their cask beers in stillage, and see the setup, but I wonder if that would just be begging for me to be disappointed.

Well, with bloggers, you're going to have whingeing. We're the furthest fringe of the beer geekiness, and we take things too seriously.

I loved the event and wish it wasn't my first time. My criticisms of the beer stemmed from knowing that breweries could have taken it a bit more seriously. I've been talking to breweries about their Cheers to Belgian Beers submissions, and they spent long hours thinking about what to brew, and went through some pretty elaborate processes in brewing these beers. A few breweries sent interesting beers to the Firkin Fest, but others just casked regular beer.

If I didn't like cask ale so well, I'd probably have raved a bit more. I did really enjoy that pale you brought to Belmont, though. I could drink that all day.

I'm trying to come up with a snappy comment about some cheese to go with the whinge, but it's not really working out to be as funny as I'd like.

I wasn't really whinging, per se. Observing. That's the word.