There's all this noise out here these days about these fresh-hopped beers. Festival after festival after festival. Release after release after release. Well, we've been growing some hops up the side of our rural Oregon house now for three years, and every year I insert an item on my multi-page list of stuff to do that I will indeed harvest some for a batch of beer that I hope people will drink. All eight casks. Gotta make a living somehow. 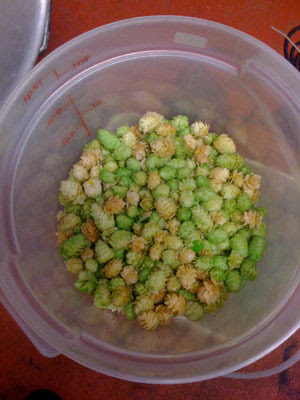 This year I managed to harvest 150g. I (really really) would've harvested more but the item didn't make it to the top of my list until, perhaps, too late. Notice the browning of the hops in the bucket. This might not be a Bad Thing (tm), though, as there was a nice aroma and lots of yellowy dandruff inside the cones. My wife, who purchased the rhizomes, can't remember what she bought, but they smelled a bit like Willamettes. Good enough for me to put in the copper. 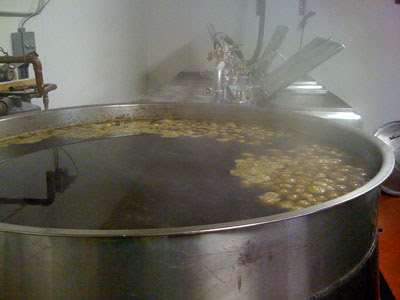 My prior life as an engineer taught me to only change one variable at a time and measure the results. I broke this rule with this batch, as I've been starting a series of Best Bitters in which the finishing hop is the only changing variable. The original bitter, called "Wotcha" and weighing out at a hefty 4.4% ABV, went for two batches (4 UK BBL) this summer. A lovely pint, as I'm fond of saying. The batch that just hit the pumps today substituted 150g of Amarillo (thanks to Block 15 in Corvallis for selling me a little ziplock baggy of the stuff) for the 150g of E.K. Goldings that inaugurated the series. A break from tradition, methinks. And then the mystery hop got tossed in. Now we all have to drink it.

Oh, and I was also pitching a harvest of California Ale Yeast of my last batch of "This Time For Sure" (Hoppy Pale Liquid Refreshment) into the stew, so there are now three variables butting heads in the cask. I'm not so wild about this strain, which will be fodder for a future post. Drinkable? Yes, definitely. See you at the pub.