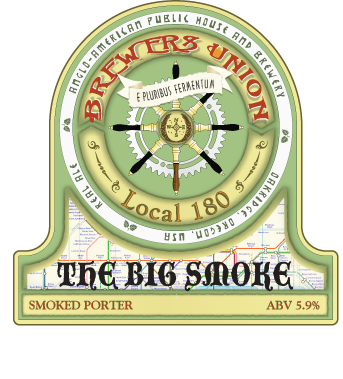 It's been a week now since I returned from a two week trip to England. Now that I've settled back in to the doldrums of the shoulder season, I should have a bit of time to catch up on the paperwork, brew some beer, and post a few observations of my wonderings and wanderings abroad. However, that's not what this post is about, in spite of the suggestiveness of title of the post being one of London's nicknames.

Instead, I'm enjoying a pint of a smoked porter residing in one of the pumps at the bar. I'm not much of one to head for the darker stuff, especially if it's smoky. Give me a pale pint of Ordinary or Best with a hearty malt base and a balanced hop blend, but this is not too bad. Its history began this spring when I was talking to the brewer at McMenamin's High Street Cafe in Eugene, my local when I'm "down in the ditch". He had a leftover partial sack of smoked malt sitting around, and we got talking about what to do with it. The plan became one of collaborating on a smoked porter up here at the brewery, to be shared between us. In October the plan finally came to fruition, and a very very smoky porter was born. Perhaps we shouldn't have chucked in the whole 45 lbs. of smoked malt, but it makes it mighty tasty with a side of bacon. I believe this to be the first ever collaboration between a McMenamins brewery and an outsider. See you at the pub for a pint, or at High Street once we do some replumbing in the beer storage room. 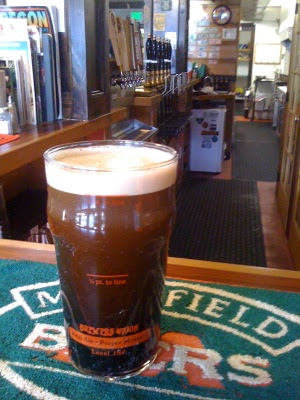 That's a grand looking pint for sure! I would love to run a pub serving such fine beers.

Sheesh, even in your eschewal (is that a word? eshewance?) of dark beers you take after the English. I wrote a titanic chapter on porter for the book (which of course included stout, which is the same) and when I got to London, found its absence so bizarre. It would be as if the French randomly abandoned baguettes. Or cigarettes.

And milds don't count as dark, either. Not proper dark, anyway.