I was just going through my blog roll while brewing today and read Bill's report on the fresh hop season. This caused me to think that I never did finish that post about our own fresh hop beer. Now I feel I have to rewrite the thing, as it is no longer relevant in the face of the fact that, to be blunt, we drank it all. Here's one of the last pints coming over the bar and soon to be in my possession. 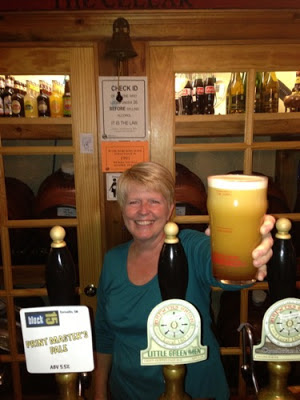 Bill also posted about terminology back in September. "Wet Hops", "Fresh Hops", "Green Hops", "Moist Hops". I don't know that there is universal agreement. I called mine "Green Hopped" as the hops were very shiny and green. Yes, I know, whole cones and pellets are also green, but not green-green, if you know what I mean. Not one to remain caught up endlessly in terminology, I thought I'd just run with it. We've been growing hops up our porch at home for several years now and I never managed to pick them. This year I got up early on a brew day and picked a quarter-kilo of the little green guys. 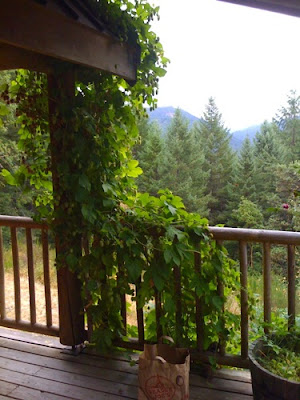 I have to admit that I don't know what strain they are. My wife thinks they are either Willamette or Cascade, and I'm guessing Cascade based on the shape of the cone and the aroma. I took one of my recipes that works really well on cask for a 5.5% ABV very pale IPA. I used Cascade and Centennial for bittering and Cascade and Simcoe for the finish. The poor little fresh guys got chucked in right at flameout. I didn't really have a name for it until a couple of days later when, while I wasn't even thinking about it, "Little Green Men" popped into some unfashionable outlying region of my cortex. 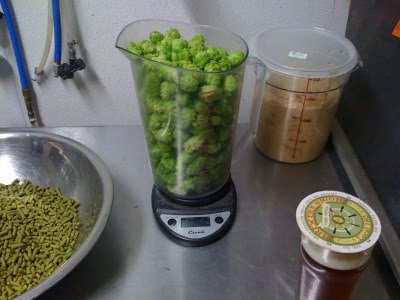 It came out beautiful. After two weeks sitting in the cask I tapped the first firkin and put it on the bar. It was gone in a day, although it is possible to do that in September when trade is still fairly brisk (as opposed to the dismal season we are heading into now). The effect of the fresh hops is subtle, but I believe it expresses itself better at cellar temperature and without the surfeit of bubbles you might encounter in a kegged or bottled version. I can't help but wonder, though, if a similar effect could be achieved with lawn clippings or dandelion greens, or whether this whole fresh hop thing is simply a marketing gimmick or cry for attention.

Now it's the season to get cracking on the alternatively-bittered November beers, such as my chanterelle, peat moss and wet-big-leaf-maple brown ale, brewed with Belgian Ardennes, cucumber seads and a dash of mace.

Sounds delicious, wish I could have tried it. I love the name, and I suppose green-hopping is acceptable jargon, though I'm obstinately standing by fresh hops.

By the way, Deschutes in PDX made a fresh hop version of their new 4% ale. It was beautiful on cask, it supports your idea that it's a good way to get the green hop flavor across.