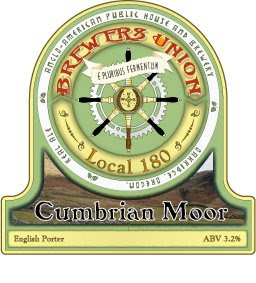 Bob doesn't like beer. He told me this a couple of times this afternoon, as I worked the full day-long shift at my pub. He had always disliked the fizzy beer, for decades, but drank some (and poured some on the ground when not in the crosshairs) so he could be out with the boys, play a little pool, walk the walk, do what it is that the guys do in a small Oregon town.
Bob drank a cask-conditioned porter tonight. I told him I wouldn't tell anyone, but maybe I was just talking in jest. No last names have been given, after all.
Our country has a "black" president-elect. Bob drank a "black" beer. And while Bob reacted favorably to the flavor of the beer, and the quality of the brew, and the gentleness of the carbonation, hopefully (before my analogy breaks down) I would wish that the disdain or prejudice against the unknown, against a color, might have been eroded just a wee bit. Maybe, just maybe, we have a little flavor going on here.
Posted by Brewers Union Local 180 at 11:14 PM

I am honored to know that I have anonymous readership, and that I have received the highly cherished Double Harumph.

I am a homebrewer in Eugene though I used to live in Oakridge. I am so excited to try out your beer and was pleasantly suprised to see a brewery of "real" beer in the back woods of the small Oakridge town. I will be seeing you soon!

The phrase "back woods" is an overloaded expression, best discussed over a nice session ale (e.g. North Fork, ABV 3.5%) and some of Nick's cilantro mango pork goodness.

I presently have around 40 firkins of ale to dispense with at the moment, languishing in the walking-in on its voyage to proper stillage. Cask beer has a short shelf life, so I welcome suggestions as to what to do with it all.