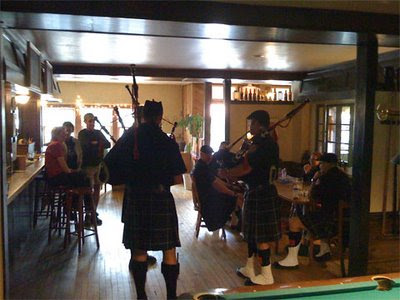 I had been contemplating a number of posts on culture, particularly how it relates to the pub, and even more particularly the American Pub (definition pending), when I came across a bunch of photos fermenting on my iPhone. I suspect that there are many of you out there on this third rock who might be unable to reconcile a gathering of screaming bagpipes as a cultural event worth note. However, this is the Great Melting Pot, and to hear these guys wailing away in the confined space of the public bar was sublime. It was Tree Planting Festival weekend in our small mountain town, and I, for one, am a fan of the small town parade. There are not many small towns engaging in this distinctly American cultural pastime, or doing it properly in my opinion, and so I get moderately "into it". This incongruous marching assembly of drummers and bagpipers, the Eugene Fire Pipes and Drums, wafted past during the formalities, and then drifted into the pub afterwards. The simple lure of a free pint was adequate impetus for a a nice half hour micro-concert.
There is a good chance I can get them back up here in full regalia and with all the exciting bits of musical equipment. I have a business card here on my desk from the Pipe Major/Manager who suggested that if I brewed a batch of beer and named it after them, then they would periodically appear to drink it and to play. Sounds fair. I'm not convinced that "Eugene Fire Pipes and Drums" is a blue-chip beer name, so I'll have to mull that over a bit, but I'm fairly sure it will be a dark mild.
Posted by Brewers Union Local 180 at 8:56 AM

How about "Does Anyone Feel a Draft?" for a name? Those guys really were great, hope that they come back soon!

Perhaps you could make a Wee Heavy and call it Pibroch?