Who has the time for this? It's the busy season - no time to sit in a corner with a laptop and dribble some drivel. However, a pint was sounding pretty good, so off to the couch in the front parlor of the pub for a typing session of random bits and pieces.

Bit # 1: It's been two weeks since I was up in Portland at the Belmont Station for the OBF Fringe Fest. I didn't go to the OBF, since it's just too big and impersonal for my tastes. Much more fun to pull pints for the punters and rub shoulders with brewers and so forth. Two firkins of real ale were drained by 3:00 on Sunday. I'd never seen so many tickers and notebooks in one place. 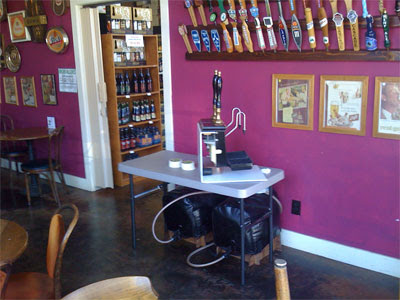 Bit # 2: I visited some new places and some old while up in Stumptown. As for the new, I tried Migration, Coalition and Apex. Portland definitely has an architectural obsession with the big shiny metal and brick box motif. I hope they do well, but I'm still looking for cozy and 6 pints of session.

Bit # 3: I often wonder how many brewpub owners in this state wash dishes, bus tables and work their own bars.

Bit # 4: The Great British Beer Festival was this last week. There is evidence that a firkin of Union Dew from the Brewers Union survived the rigors of a Trans-Altlantic journey. I really need to get back over there someday.

Bit # 5: We're running out of beer. I'm brewing twice a week now to make up for the increased traffic and to prepare for the onslaught of Mountain Bike Oregon. Low ABV cask ale does sell.

Surely that should read over hopped high octane over fizzed beers sell well? ;)

It is indeed interesting that low ABV cask sells incredibly well over here.

There is evidence that not only did the Union Dew survive the transatlantic journey but was quite tasty with it.

Any word on the reception for the Union Dew?

As for Coalition, you have to say that the inside, though wee, is cozy and wood-paneled and not so shiny or metal.

Only word was from Dave in the comment above, and he just might be biased. He did spend a whopping £4.80 on the stuff, though, when he knows he can get a pint here for $5.00.

From what I've read, most if not all of the US casks were gone by Friday.

i had the UNION DEW on the first day of the gbbf and thought it was excellent.It was slightly hazy but was a well balanced hoppy beer.i tried 16 british and 5 american beers and yours was one of the best on the night. cheers