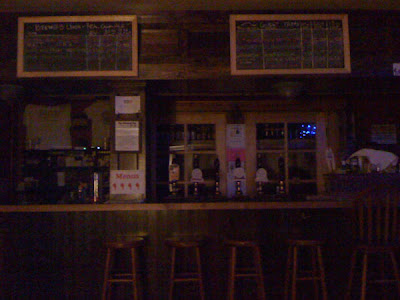 I was going to say that it just doesn't end, but it does. The pub was closed today, albeit without second-hand complaints from a few, but it was nice to take a day off. Well, most of one. While the door is locked, there is still a lot of pottering about that takes place.

It's late night on the first of the year. I'm not prone to making "best-of's" or collective summaries just because a number increases by one, but was sitting at my favorite pub table near the bar, armed with notepads and the trusty computer and bits of whatnot, and got an inspiration to take a grainy iPhone photo of the dormant bar and environs. It had a nice peaceful look to it, resting up for another year of the social melee. There is year-end inventory to deal with right now, and my accountant has made a number of demands about cash-on-hand and mileage and so forth. I find it a bit petty, myself, but one must at least hazard a dance with the rules, or at a minimum flirt with them across the dance floor from the comfort of the punch bowl and the attractive platter housing the cheese and cracker selection. Also, our New Years Eve party, full of lively locals and winter revelers and replete with the bluesy strains from Kip (who played for 4.75 hours) drained a couple firkins of ale that needed tending to tonight. Fear not, the stillage is stocked and the pumps should be flowing tomorrow for the last day of the Winter Break.

After going a month without being able to brew due to lack of funds, a bit of money was scraped together for another pallet of grain. The Big Winter Stout is finally in the fermenter. Yep, I'm just starting to brew the winter beers now. Winter's not over; just getting going. The opening of the ski season on Thanksgiving weekend resulted in the increase of the amount of brass in the coffers to the point that it once again doesn't feel hopeless playing the publican in this wayward town up in the mountains. In the long dark teatime of November I couldn't help but think about just packing the pub up and moving it to a more populated domain. Now, just looking at this temporarily dormant little block building on First Street, with the beat-up furniture and the weathered Mac Court floor and those enticing England Worthside pumps on the bar.... I think I'll see what happens tomorrow. Tenacity. I have a little bit left, and if I want to appear borderline sane tomorrow I must finish up here with the stuff behind the scenes that doesn't end and get some sleep, because 2011 awaits. See you at the pub.

That's what you need; Tenacity.

The best way to deal with rules is to flirt with them, then drop them like a one-night-stand.