Wow. Almost a month since my last post. Some might think this as either a sign of being too busy, or maybe just a lack of compelling material. Truth is, I started several posts and have subsequently deemed them to be rubbish. But now I sit in a pub in Eugene in anticipation of the opening of the KLCC Microbrew Festival. Once again we are down here in Eugene trying to cool casks with ice blankets and artfully fielding questions like, "is that a nitro tap?"

This year's collaboration (or collabrewation, as I like to call it) beer is right up my alley. Those brewery type folks what attended the meetings that I couldn't go to decided we should all brew a sessionable pale using a single malt and a single hop. Each brewery was to choose a different hop and use their house yeast. I am now working with Wyeast London ESB (WY1968). I was, of course, curious how the gray matter of a West Coast brewer would interpret the concept of sessionable. Would Ninkasi produce a 6% pale using Citra, for instance? I shot for a nice low ABV session (or ordinary) bitter using U.S. Challenger. 130 lbs. Gleaneagles Maris Otter went into a 2 UK BBL batch, with 1.2 Kg Challenger at the top of the boil and two 0.2 Kg drops toward the end. Talk about pale. It's a bit deceiving, though, as it comes across nice and spicy/bitter, with a wee little malty note towards the end. All this at 3.2% ABV. I decided to call it "Au Naturel". 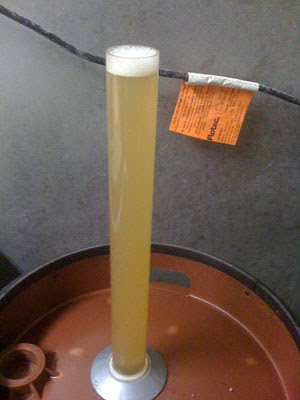 I had the pleasure last night of popping over to Oakshire last night where a gaggle of the brewers brought over jars and growlers of their batches. The naked malt and hop flavors and aromas make for interesting comparisons, as the distractions of specialty malts or hop cocktails are absent.

In less than an hour I head over for the opening shift. I like to have myself and/or my staff present to serve, so we are well represented and can handle questions. We are also pulling a cask of "Mutt", which I hoarded just for the festival, much to the chagrin of some or our regular customers. Hope to see you at the festival. I'll be there for the full two days this year, as there is no conflict with productions from my local theater group.

looks like a nice beer. I am convinced that it is these "simple" beers that prove the ability of of brewer.