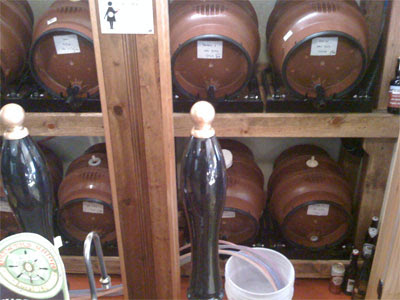 It's really not a difficult task; takes about an hour of punctuated attention. I have six hand pulls, and consequently six lines, that service eight casks on the stillage behind the bar. The beer line cleaning product is some pink stuff from Shepard Bros. that mixes easily in a bucket of water. Disconnect all the lines, drop them in the bucket, and pull through each engine until the liquid dispensing into the little metal pail starts to appear a wee bit pink. Let sit for 15 minutes. Pull another cylinder through. Let sit for five. Pull another through. Let sit for five more. Then clean out the bucket, fill with cold water, and repeat the process until the liquid coming out of the neck is clear and non-slimy.
This is then a great time to rearrange the ale lineup, hopefully in some rational sort order such as by ABV or style. The rules of whimsy also sometimes apply, and it's fun to keep the barkeep on his toes, which is often myself. It also confuses the punters and makes them read the pump clips.
Once the lines are all hooked up, then each and every beer has to be sampled. 'Nuff said.
Cleaning the six keg lines is much more difficult, as it entails dealing with a pressured corny keg full of cleanser and lots of spidery gas and beer lines all tangled up in the cooler under the back bar.
Posted by Brewers Union Local 180 at 1:51 PM

Why don't you just clean the line everytime you put a new beer on?
Ben
Liverpool

The keg stuff, fizzy sh.. (rubbish) as Alan likes to call it, is a pain. We have things called cellar buoys. These shut of the flow of beer from the kegs when they get empty and avoids the lines filling with foam, which would then be a pain to clear. With long lines, like we have, this is good.

They are traps for yeast infection however, and need to be thoroughly rinsed through to ensure the beer does not taste of chlorine after cleaning. Our current beer selection, being authentic continental beers, are not as processed as the mass branded stuff. They contain traces of yeast and protein that are a source of line infection if not kept in check (Czech). I expect West Coast micro brewed beers are the same.

Anonymous Ben: Casks get swapped out randomly, and during the busy period when business is being conducted over the bar. Mornings, such as a nice Wednesday at 10:00, are a nice time, and I only have to mix up one bucket of BLC.

Woolpack Dave: You're using a chlorine based BLC? I don't remember cleaning the fizz lines while I was there, but do recall mixing up something in a bucket in the cellar for the cask beer.

It's got chlorine in it. I don't know what else, but it smells of chlorine.

Yes, we clean the fizzy lines, but we don't need a pressurized keg. We use a gas pump to draw it out of a container at atmospheric. We have cleaning heads under the fizz pumps in the cellar that connects all the heads together. I'm surprised I didn't show you that. I'll have to send you some pictures, if I remember.