Small beer. The first cask of the Welsh Mild hit the pumps on Saturday. I had some folks in here this weekend delighted by the fact that they could hang out with their kids for five hours, have some fantastic homecooked food, and drink more than two pints of ale - the typical limit with the high ABV frenzy that seems to permeate the Pac NW Beerosphere.

I wasn't sure how this batch would turn out. The recipe, like many others that appear here, was scratched out and rewritten a few times on a couple sheets of scrap paper. I wanted to use a peated malt, Simpsons from the UK, but not overpower the aroma. The result was 1 lb. of peated malt in a total grain bill of 151 lbs. This is a powerful malt - caveat emptor. 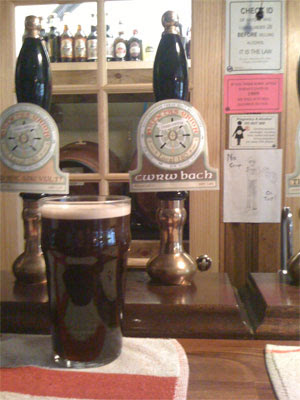 I'm liking it so far, but would like to make a few changes and run it again. I think the Carafa III could be upped a few pounds and the 1/2 Kilo of E.K. Goldings could be dropped back to half that. All in all, a decent tipple. As I mentioned before, I think it would've been nice along with the morel dish that we had on the last week, but alas they have been consumed. Alternatively, there is the Scottish Fish Pie or the New York Strip Steaks as an option. See you at the pub.

I ended up using just 0.1lb in my Experimental Dark Matter, tempted to use the rest to attempt making whisky!

Based on your initial impressions of the mild, I take it that the peat malt character is not overly strong. Is it noticeable at all or would you risk more next time?

It's noticeable - nose as well as palette. I certainly wouldn't use more, unless it could be offset with more of a malt character, which is what I will attempt next time by cutting back on the hops and upping the non-fermentables. Might also up the mash temp a bit.

"as testified to by the renowned Amman Valley poet Watcyn Wyn, the cwrw bach (sometimes known as y meth)..." So can I ask you for a pint of meth next time?

You may ask for aforementioned beverage, of course, as long as you identify yourself as Anonymous.

Nice bit of research. I learned the term in 1991 while hiking around Wales, specifically in the small village of Llanarthney near the Towy River.