There and Back Again

This last week was consumed with traveling to Upstate New York and back, my old stomping grounds. It was my parent's 50th wedding anniversary, which cleverly coincided with mine and my sister's birthdays. Outbound was a drive to Portland for the red-eye involving Houston and Newark before landing at the diminutive Ithaca Tompkins Regional (used to be County) Airport. The return, given Delta's reluctance in getting airborne when scheduled, involved cramming us into standby's that featured Detroit and Atlanta before getting back to Stumptucky. I was reminded of a story by The Onion whilst in transit. Needless to say, I took any opportunity I could to sample a refreshing beverage.

There certainly are more options in Ithaca than when I left there almost 20 years ago. Names like Saranac, Southern Tier and Magic Hat were evident. It was good so see that the Ithaca Beer Company was still around, and my perception was that the brews were better than the last time I was in the area around five years ago. If only they wouldn't serve them so cold. The old Chapter House, which actually housed a small brewery back in the late eighties and early nineties dispensed the best pint I think I had while in Ithaca; the Ithaca Beer Company's Flower Power IPA. This was partially due, I think, to it being served at a decent temperature and not over-carbonated. It was also nice to see that they finally fixed the lights in the sign. 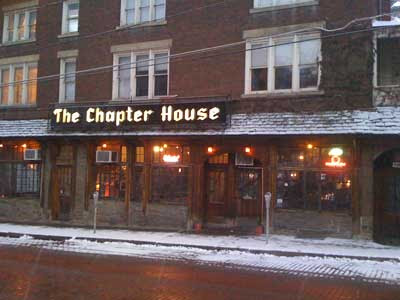 Back in Portland, I had a chance to visit a few places in search of cask, a concept lacking in the Finger Lakes region of New York. The Bridgeport Ale House on Hawthorne was suggested by Mr. Beervana, and as I had never been there I gave it a go. The Bridgeport IPA on cask tasted just like the pint I had a couple years ago at the modernized restaurant and brewery on Marshall. There's something dry and metallic about it that puts me off a little. The Ebenezer, however, was decent. I didn't even mind the atmosphere that much. After hitting Powell's, I had to pop over a few blocks to the Deschuttes gaff, since I know it has decent cask. It did - a drop of the classic ESB. Measure was off, though, but I didn't complain about not getting my entire 0.5 liter as I didn't feel like getting glared at. 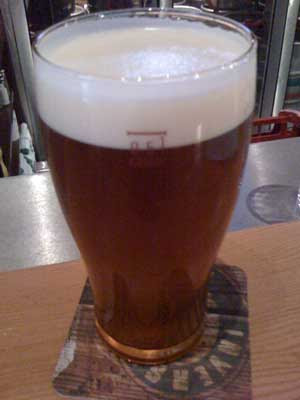 Next up is a (wishful thinking) return to England to revisit proper pubs and to refresh my palatte. Cash and check donations for the travel fund can be sent to the pub via USPS or hand-delivered.

The thing about pubs is you never know if they're going to have a decent beer on tap. I should have warned you that the BridgePort IPA for some reason doesn't sing on cask. The ESB is my recommendation, always. The Ebeneezer, a beer I don't much care about normally, is actually pretty good on cask.