Tools of the Trade

It's brew day again. This is an event that requires 8 empty firkins and at least a continuous 9 hour stretch of time that hopefully starts no later than mid morning. The understatement of the day is that ingredients are important too, and I hope I can scrape together $1600 to pay off my last grain bill so I can order more. There is about one batch's worth of Maris Otter in the millhouse at the moment, after milling out 200 lbs of the stuff for today's batch. Today's experiment is another batch of West Coast IPA based on Schrodinger's Beer. This time, instead of using the 14% alpha Sorachi Ace for bittering, I will be substituting something else with a lower alpha but using twice as much. I'm not sure what yet; there is a limited number of choices in the cooler. Us shed brewers operate under a different economy than the Big Boys (tm). As such, I'm also contemplating raising the price of a pint (proper) of this brew to $5.50 to pay for the 7 Kg of hops that will be going into it. I don't think this is unreasonable, as many places already charge this in urban locales that don't have to suffer the higher costs of delivery and the relative paucity of patronage. At least it's not the $6.50 that Pelican (a Big Boy (tm)) charges for a pint of room temperature bitter, with the justification that they operate in an economically and seasonably challenged location. And Rogue? Don't get me going on Rogue.

But this is not a blog about beer - it is a blog about tools. I have directed a few posts in the past to you, yes YOU, the prospective brewer and pub owner. This is another. As you progress your way into this silly business, it would serve you well to know how to handle a vast array of implements of de- and con-struction. A week ago, on brew day, my fancy shed brewery counterflow heat exchanger "blew a gasket". As $2500 in potential profits were being brewed at the time, this needed to be fixed before the end of the boil, so as to chill the wort on the way to the fermenter. There's nothing quite like sweating pipes while 100 gallons of wort boils a yard to the posterior, occasionally burping a gobbet of enthusiastic froth over the side and onto the floor, endangering life and limb. 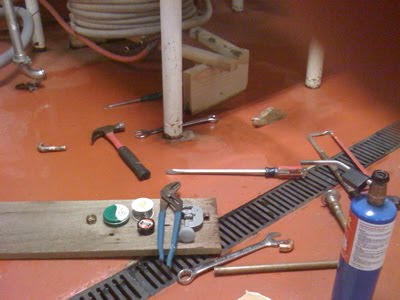 Postscript: As I'm writing this in the cracks of time afforded during the brewing process, I have since weighed out the bittering hops. I went with Centennial for bittering, using 1.5 Kg instead of the 2.0 I had originally thought necessary. This harvest has an alpha of 8.8%. Total bittering hops weighed out at 3.5 Kg, which is the most I've ever used in a batch here at the brewery. I used the same 2.0 Kg of Glacier to partner with it as I used in the last batch of Schrodinger's.

Last week's repairs are still holding. For Christmas I would like a nice new Big Boy (tm) plate heat exchanger, so please put it on your list. 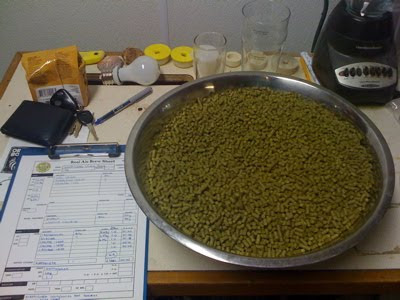 I must say I'd increase the price, but as an aside, I loved the Pelican Pub when I went there, though I liked the Inn at Cape Kiwanda a lot too.

And they sold imperial pints as well as titchy Yankee ones.

Damn it, why is this country so big? Your place sounds exactly like the kind of local I am looking for! Fancy opening a branch in VA?

@Sparklers: I LIKE Pelican. The location is stunning. I remember going there years ago when they were smaller and humbler, as it's a splendid day motorbike ride from Oakridge (with return) and there's beach, beer and burgers to boot. I just question the cost of a pint of beer, how well kept it is (or not), and why it is necessary to maintain their polished demeanor to justify it.

@Werst: This batch consumed the last (200g) of the jumbo box of Nottingham bricks that I bought before the pub opened. As we metaphorically speak, there is not an ounce of brewers yeast left in the house, save what is now embarking on a brief but delicious career in FV1. Schrodinger's Beer (previous) used half Nottingham and half Windsor. That might be like crossing the streams, but nobody had died yet from the experience. I now have to try to pool together some coin to purchase some new yeast before I can brew again, not to mention grain. I know you recommend some vagrant California ale yeast. Any other suggestions?

@V. Al: I was born and raised outside of Ithaca, NY, and have never even been to VA. The Adirondacks and New England was my playground. And VA is not that far off from NY. It is a big country, but a cross country ticket is cheap these days, and you could bring a recipe and make some beer here.

That vagrant California Ale Yeast is a true top cropping strain. Sierra Nevada got it a long time ago from Ballantine on the East Coast. They got it from England. Us California folks just adopted it, as we think it's a fine yeast. It brings both malt and hops to the forefront. It's a shit flocculator; it'll have to be fined for it to drop bright. I use it in just about everything I brew. The only liquid strain I use is White Labs, WLP-005, British Ale. Your only other option would be Safale-04, which I cannot stand, unless used in a Mild, Porter or Stout. Maybe Muntons Premium Gold? I don't know if you can buy that in bulk. Forget Safbrew S-33, that's supposedly EDME. It's crap.

@Suasage "That vagrant California Ale Yeast is a true top cropping strain. It brings both malt and hops to the forefront. It's a shit flocculator; it'll have to be fined for it to drop bright.

Explains quite a lot that if it is used widely.

I know of a few brewers now who are mixing yeasts without death or serious injury occurring.

Just trust me on that one.

Let me work on some of my recipes and be happy with them and then I may very well take you up on that!