Late Wednesday morning. Just finished cleaning the cask beer lines. The weekend lineup is looking good. Same with the cold fizzy stuff. On cask is a rye mild, a rye special bitter, a hoppy pale liquidy sustenance beverage, the Ridgeback Red from Block 15, cask 6 (of 8) of the Belgian Cascadian Dark Rye gustatory delight, and the tail end of the last cask of the big Winter stout. As I write this, I just noticed the preponderance of rye brews. Go figure. I also pinched a cask of Aboriginale from Block 15 which will replace the Red as part of our ongoing cask swap program. 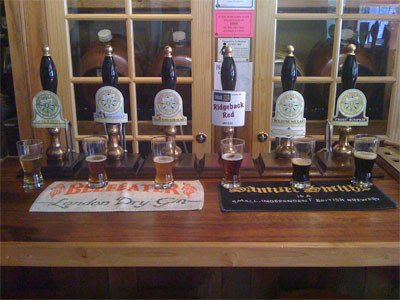 I managed to snag a keg of "Duck Billed Platypus" from Oakshire yesterday while I was in Eugene doing the purchasing. Had a very nice chat with Jeff Althouse, who is always a real treat to spend time with in his brewery office where some of the more mundane activities in the business are realized. As I continually wrestle with the onerous task of keeping this quirky little brewery and pub afloat, it is nice to hear stories from a friendly brewery, with a completely different business model than our own, that has to deal with similar issues such as IRS levies, negative cash flow, staffing, consumer opinion, and a funky economy, amongst other trifles. For those of you who don't know, D.B.P. is Oakshire's translation of the 2010 KLCC Collabrewation Beer. Starting today we will have their kegged version and our casked version on simultaneously. 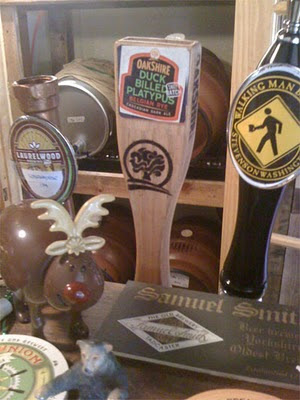 The rest of the guests are top notch, as can be attested by the expression on Happy Moose and Sloth Bear housed on the coffin box. There's snow in them thar hills, and all you locals who appreciate good music and those of you passing through, whether from the slopes or otherwise, will be duly entertained by the genius of Peter Wilde, who will be playing here this Saturday night along with Danny Shafer. This is indeed a rare treat. See you at the pub.