I was going to comment on the [drinkability?] [quaffableness?] [sessionability?] of the latest session beer offering on the pumps, "Bob's Yer Uncle", weighing out at 4.0% ABV and tasting like the brewer mixed a Belgian yeast harvested from a previous batch of weirdness with a bitter ale recipe. But this is not a blog about beer, it is a blog about how publicans from different parts of the world, say, Britain and Oregon, set stuff up in the pub.

This is a thin topic; there's not a lot of meat here, but I've discovered that I annoy my staff by putting beer mats, or coasters are they are also called, directly in front of the seats. Why? Because that's not only the way I tended to find them in British and Irish pubs, but the way I was instructed to while I was working there. 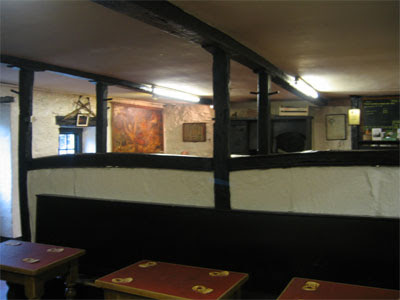 Beer Mats at the Old Dungeon Ghyll in Cumbria

They are sorta like seat markers in my mind. Now, the argument here is that the punters have to move them when they sit down. My response is, "So." I'm fine with that. My pub and all. Not like it really matters. But does it? When I'm fronting the house I put them at the seats, not in the middle of the table. And I have to wonder how it started this way. I have made an informal study of the public house since 1991, the first time I ventured to the UK, and I am fascinated by the differences in habits. If I were to sum it up, and that's just what I'm about to do, I've discovered that the British and Irish pub denizens head to the pub to have a few rounds and socialize. The pint gets directed to the top of the beer mat. Here in the U.S. of A., most are looking for a restaurant and want to eat and move on to the next thing. The beer mat is shoved to the center of the table. Silly Americans; can't they just enjoy a nice evening session.

The other annoying thing I like to do is put little tick marks next to the special offerings on the specials board behind the bar. Helps me keep track of how many of the goodies are left. I've been told this negatively influences the patrons' decisions about choice, but we seem to go through the specials anyway. Go figure.

Let's go back to the Old Dungeon Ghyll.

I guess we'll have to, as Dave and Ann have fled the Woolpack and I don't know where they are.

In Germany where eating and drinking are are often, but not by any means always, combined, beer mats are usually in the middle and are put back there when the patrons leave. Ho Hum.

The Old Dungeon Ghyll had no Old Peculiar when I visited there the other day. Other than that it has not changed a bit since you were last there.

I know one other pub very close to here that puts tick marks next to menu items. The customers fail to be negatively influenced in most cases. Dare you to finish a large pasty however.

I'm guessing that that might be the Prince of Wales, which I miss very much. I distinctly remember the little blackboard next to the bar with all the hand-prepared goodies. And the little tick marks.