It had to happen. It was time for something to break; as inevitable as death, taxes and noisy neighbors. When we built the pub we decided to go cheapo DYI and build a cellar and cooler behind the bar using air conditioners. Cheap air conditioners from Sears. After all, it's a room 10' by 8' by 4' that has to be kept at 50 of Heir Fahrenheit's degrees. We could have installed a professional ductless A/C, and spent an order of magnitude more money, but this was more fun and had that rebel element to it that has a myriad of satisfying qualities.

Well, this pour old boy has been churning out cold air for six years now and is growing weary. There's nothing quite finer than popping into the pub of a morning, with a skip in your step, whistling an old Steely Dan tune, eager to prepare the pub for a fine day of the eat, the drink and the merry, to confront a big block of ice where your A/C unit used to be. 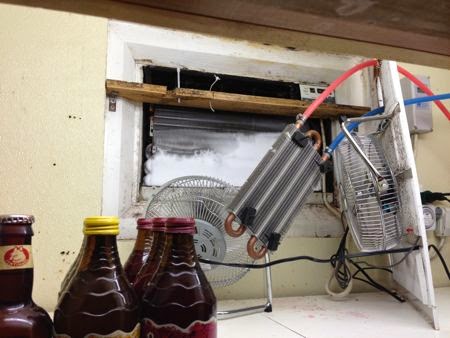 So I bought another Sears Kenmore air conditioner. As I was attempting to purchase the new toy, carefully checking dimensions to make sure that the new unit would fit in the same hole through the block wall as the old unit, the nice Sears service man asked if the warranty was still good on my old one. When I told him that I yanked out the electronics and substituted an external temperature controller, he just silently shook his head and took my debit card.

The old unit is still limping along, and requires a couple of manual defrosts per day. Scheduling time with an early morning rise and a handy helper is my next step. I've unboxed the new guy and have been gazing at it with a look of unbridled hope and admiration. It's got all new electronics that I get to figure out how to bypass. What could go wrong?

My father-in-law used to own a mail-order smoked meat business in Texas. When I asked him why he sold it, he said [imagine good ol' boy drawl]: "Bill, I thought I was in the meat business, but one day I realized I was really in the refrigeration business, and that just wasn't as interesting to me".