AAAARRRRRRGGGHH! or Where Can a Man Get a Decent Shive Around Here?

All of you know what a shive is, of course. You are all discerning readers, you've been around the block a few times, traveled a bit, seen some stuff, read the occasional book, taken a few classes; all in all, smart people. All I'm asking is for one of you to politely inform me as to where to go and acquire myself a baggie of a few hundred plastic shives. And don't say Murphy and Son, because they seem to have discovered that the large body of water that separates us is too intractable a medium over which to distribute the nice yellow 52.3 mm units. 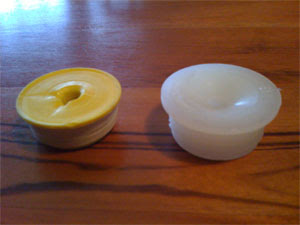 This is a giant country - 300 million people or so, from what I'm told. But you'd think I could find a little round piece of plastic to whack into my plastic casks. Apparently not, at least not the right kind. I managed to find a source over on the East Coast that provides the Eurobung shives (at right in picture), but the diameter at the sealing surface is 1 mm too much. They also have a peculiarly designed hole for the spile, which not only takes a more profound whack with the mallet to penetrate, but then engulfs too much of the spile making it difficult to gently remove so as to ascertain the conditioning of the beer
But the shive on the left - ahh, there is a shive to die for. At 52.3 mm at the sealing surface, they mate nicely with the plastic CypherCo firkins. I kept this last used unit as a memorial to what a great shive should strive to become.
So, for all you alert and discerning readers, please contribute to the proper sealing and venting of real ale casks in Oregon by dropping a few hundred workable shives into a cardboard box and mailing it to the Brewers Union Local 180 in beautiful Oakridge, Oregon.
Posted by Brewers Union Local 180 at 1:44 PM

So, lets get this right. They just will not send them?

I'll just have to see if we have a spare suitcase to fill.

I consistently get dropped out of contact, then have to start anew. I take this as a refusal, since the issue of shipping keeps coming up.

I'll buy 100 off ya. There should be room if distributed amongst the kids' clothing.

Another suggestion would be to contact Alex Hall @ http://www.cask-ale.co.uk/us/index.html

Best of luck, next time I am in Oregon, I am definitely stopping by!

UK Brewing has supplied me with numerous bits and pieces. Their shives, though, are not suitable for the CypherCo casks, and are the ones depicted on the right in the picture. The Eurobung keystones work OK, but are not as nice and sticky as the ones from Murphy's.

I will, for the time being, be receiving my shives from my sister pub. They brought me out a backpack full in December when they came to visit.

Hi B.U.
I think Eurobungs do make a shive that fits, as the brewery that we used to contract-brew at used little else than cypherco firks & Eurobung shives.

The only complication is that they have learned that if the casks are the ones with ridges on the shive-hole (rather than the smooth ones), they need to heat the shives in hot water before driving them home. (seems like a pain in the arse!).

Another local brewer uses the smaller harder coloured plastic shives in your pic - I'll try to find out where from.

These ebay black&white shives look like ones from Rankin Bros - http://www.rankincork.co.uk

Annoyingly, after just buying a few hundred shives, perfect for our all-stainless cask population, we just won 60 2nd-hand cypherco's for a decent price in an auction. - We'll see if we're going to struggle to fit them!

Good luck - if I've been of any help, a pint & the airfare from Liverpool will suffice :~)
cheers,
Mike,
http://www.betwixtbeer.co.uk

The trouble I've had with dealing directly with companies in the UK is that they get edgy when thinking about shipping to the US. Fortunately, Woolpack Dave brought out a backpack full of the nice shives that are available from Murphy and Sons when he visited in December, so I'm good for a while.

I can get the Eurobung keystones from UK Brewing Supplies in Pennsylvania, and they work OK, although not quite as good as the Murphy ones.

I will investigate the other links that you included. And although I'd be glad to spot you a few pints for your troubles when you visit, I'm sorry that the airfare bit exceeds my current budget. Unless you want to make that reciprocal.