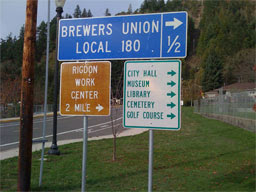 It's up. Only took a couple of months, but it's up indeed. I had applied in August to the Oregon Travel Information Council for what they call a Tourist Oriented Directional Sign out on the main highway that winds from the Southern Willamette Valley to the Willamette Pass and beyond; four signs, actually, as they require two in each direction of the turnoff. As I had already thumbed my nose at conventional wisdom by not putting my pub and brewery out on the main highway, I thought that I'd see if we'd qualify as a tourist destination, such as a winery or a museum, and get some big signs put up to pull people off.
The State did issue me an approval, but required that the city put up an additional sign over the bridge to further direct the thirsty traveler my way.
There it is. Ain't it purdy?
Now I get to see how long it takes for the State to do their job. Ski season is quickly approaching, and I can't think of anything finer than a few rounds (see previous post) of real ale to top off a lovely day on the slopes.
Posted by Brewers Union Local 180 at 3:10 PM

Would you believe our neo prohibitionists here are starting to question the wisdom of signs for pubs on roads, in case it encourages drink driving...

I could order one that says "Woolpack Inn 5500 Miles" with a little arrow pointing in the same direction. You would have to seek approval from City Council.

I think the Neo-Anti-Trans-Fat-League should question the wisdom of signs in front of chip shops, in case it encourages over-consumption of fatty, greasy food which leads to heart disease which ties up the health care system for which you the taxpayer enjoy the financial burden.